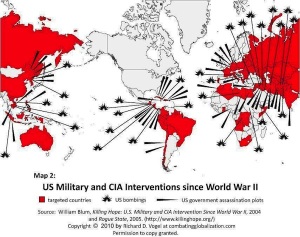 Think no thought that peace will ever reign.
There is no hope, for the evil are insane.

Lead us into temptation to destroy humanity.
And so it will begin, another war is our destiny.

How is it that children grow to hate?
We have been taught that what is yours is ours to take.

Kindness, gentleness and compassion have been dead for years.
Jealousy, envy, fear and loathing are thrust into hearts like spears.

The ones who lead us will never admit that they are wrong.
And those who do the fighting will keep at it all the day long.

Yes, evil is insane and the godless hold our fate in their hands.
We have no future, if we are all enemies from different lands.