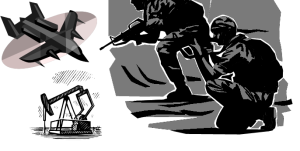 Warriors, once so proud, now kill innocents by remote.
There is no war that ever was a war to end all wars of note.

You’re a hypocrite born and bred and you’re filled with gratitude.
What price will you not pay just to get that precious crude?

I keep the wars away from you as you seek the pearly gates.
And you in turn enrich my coffers; over all, lust dominates.

What was theirs was mine to take with weapons so superior.
Of the people that I kill, they’re irrelevant and inferior.

Judge not the warriors job for he obtains just you what you need.
And ignore the cries of the dying, as you pay their death no heed.

What we have here is outrageous hypocrisy. We have people who sit up in church every Sunday and yeah, get your fancy, smancy shit ready for tomorrow so that you sit up looking all smug and stupid thinking that you’re all the shit when you’re just really all about shit because how the hell are you getting to church? How are you getting back home? You people literally make me sick with your smug ass posts about what’s needed to stop the wars and the warmongers and the war machine and you act as if it’s not all about YOU! Well, it SO fucking is because every single goddamn time that you pull up to the gas pump and fill the tank, someone in a distant land who just so happens to be sitting atop some oil, dies. You fucking know it but you’re so goddamn hypocritical and ‘christian’ that you distance yourself from the knowledge. Well, here is to in YOUR face with YOUR hypocrisy! Stand in the goddamn mirror and look at that evil, distorted caricature of a supposedly inherently decent ‘human’ and most likely you think of yourself as ‘christian’ too. Well, I’ll tell you what you are, you’re a blood thirsty, filthy, depraved, corrupt shit that likes to think that you’re better than the ones you call out. You like to think that you’re better than the corrupts shits that run this shithole called America. You’re so fucking not! You’re right up there with those worthless shits because everything they do is done because you’ve just got to have CRUDE and that CRUDE does not belong to U.S. And goddamn it, we don’t care who gets destroyed just so long as we get to drive to the fucking mall and to the club and to the grocery store and to any goddamn where we want.

America has been fucking up the Middle East for how long now? Years too numerous to count! And why would that be? Eh? You don’t know? Of course you fucking know! It’s because of you, see! You’ve got to fucking drive, baby drive!!! So, shut the fuck up about some, “why are we always trying to start shit in foreign lands?” Shut the fuck up about how tired you are of what’s done in your name. ‘Cause you ain’t tired. You fucking SO ain’t tired! ‘Cause if you was, you’d of done something about it by now. So drive your goddamn ass to church tomorrow, sit and pray with your hypocritical ass covered in some silk and some more shit and pretend like you’re the greatest thing that ever lived simply because you went and typed some shit about how much you bemoan the loss of life due to some shit that’s done ’cause you can’t fucking stop driving! When you come the fuck up in here, you’re gonna get the goddamn truth. And ain’t no goddamn body asking you to like it ’cause the dead in Yemen and Iraq and Afghanistan and Libya and so forth and so on, they don’t fucking like being dead ’cause you need some goddamn CRUDE, SEE!!!

Let’s start with America’s oil consumption, which is 18.8 million barrels per day (MBD), according to the EIA. That usage puts the U.S. atop the list of the world’s largest oil consumers by a wide margin. Indeed, U.S. demand is more than that of the next four nations combined: Japan, Russia and rising economic powers China and India: