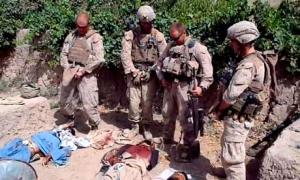 I look down at the weapon that I hold in my own hand,
standing over a lifeless body in a strange and foreign land.

I just took a life and I don’t even care!
But on my daughter’s head, I would not harm a hair.

What difference should it make and how could I ever kill?
And yet I look down at you and in death, you lie so still.

I stand here blaming you for the cause of your own death
and never think that who I kill for are those who hold the wealth.

They say that I am a soldier and that what I do is right.
I just go to the wars they start and then I begin to fight.

What use is there in wondering if it’s me who’s in the wrong.
I know that what I do ain’t right and I’ve known it all along.

But you see, it’s just a job to me, it’s not personal at all.
Remember, I’m just a soldier and your death was not my call.

If I take the fight to you, then you won’t bring it here.
They control us with their lies and say it’s you that we should fear.

You are dead and I’m alive but for how long I do not know.
The war machine continues on and someone’s blood will always flow.

Think about who the REAL enemy is! Yeah! I know, ‘thinking’ for yourself is a novel concept, but attempt it anyway!

10 thoughts on “Blood Will Always Flow!”