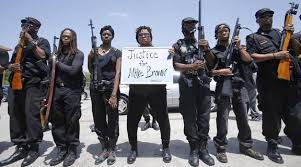 Who dragged our ass to America
to become the hated ones?
Don’t you blame us for your shit
while you kill us with your guns.

Yes, you’re depraved, diseased and vile
but we’re not the punks you mistake us for.
And when next you come for us
motherfuckers, this means war!

Black people get mad as hell! Get fucking fed up! Don’t let this shit go unchallenged because when we do, it continues. Don’t expect some goddamn assistance from that lying piece of ‘presidential’ filth and damn sure as hell don’t expect no help from Eric ‘Hold UP, Wait a minute’ Holder! If we don’t want our ranks reduced to that of the Indians, and we ALL fucking know why there’s only about 45 Indians left, then we’ve got to take matters into our own hands. In every single goddamn state that allows the whites to openly carry guns, you do likewise. In every goddamn supremacy filled state in this shithole that allows the white shits to carry around concealed weapons, you do likewise. Buy your guns and arm yourselves because I for one am not going out like some punk ass bitch. Those laws that were put on the books with regards to the 2nd Amendment that the fucking skinheads and Klan motherfuckers go on and on about, put that 2nd Amendment right to ‘bear arms’ to use for you. It ain’t meant just for those godless fucks, it’s meant for you too. They dragged our ass over here and now want to kill us because of some vile ass shit that’s on them? Oh hell nah!! Meet like with goddamn like and see how fast they change the goddamn laws! Fight motherfucking fire with motherfucking fire. Go out and buy you some damn guns!

…and for the goddamn son-of-a-bitch that had a motherfucking problem with my language, go to hell, you white bastard! Now, how’s THAT for toning my language the fuck down?!!! You wanna know who I ALWAYS aim to please? ME!!! Now, fuck you!

2 thoughts on “Motherfuckers, This Means War!”