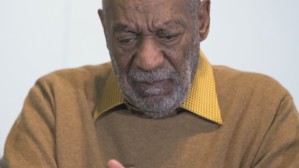 Well, well, it’s Bill,
the next to take a spill.
Once so high and mighty,
he stripped women of their nightie.

There’s ‘pound cake’ in your hand.
And I know you understand.
Caught with your boxers down,
the white folks favorite clown.

It’s good that you are rich,
‘cause karma is a bitch.
You said the Blacks were crass,
and that we had no class.

You’re looking kind’a bad.
What you’ve become is sad.
You’re an old, dirty bastard,
and I hope your life is shattered.
They’ve pulled the plug on you,
so bend over, you’re getting a screw.

Mr. ‘Jello’, ‘Dr. Cliff Huxtable’, the ‘raping’ obstetrician(that’s rich), comedian, author and quite actually, just another piece of shit is the latest to fall and fall, hard! He cut Black people down seeking approval from his white audience. What happened Mr. ‘Jello’, you getting too hot to handle? Netflix just cut you loose. The University of Massachusetts Amherst has cut ties with you as has NBC. And don’t even think about crawling your nasty ass back to the Black community looking for some support when you threw us under the bus on your way up, stepping on us while calling us basically, insignificant thugs who steal ‘pound cake’. Well, you’re getting pounded now, ain’t cha? And it couldn’t be happening to a more deserving dog. Eat dirt, you nasty, filthy motherfucker!