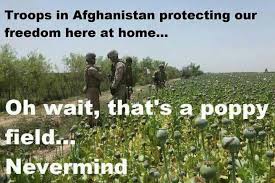 The war in Afghanistan is not over,
since an occupying force remains.
The government lies again,
and not one military whore complains.

I’m not buying this load of bullshit,
when 10,000 boots are on the ground.
If the conflict is really over,
why are those whores still hanging around?

They’re guarding those poppy plants,
for a growing worldwide demand.
Yep, the good ole red, white and blue,
is still smuggling in contraband.

Now go sell it out on the streets,
so they can bust your ass real quick.
You’ve got to learn that it’s their game,
and they sell it, brick by brick.

There’s a methadone high just waiting,
for the junkies strung out so bad.
Get your ass inside a clinic,
you will make Big Pharma glad.

They’ve got everything you need,
because now you’re getting high.
You’re locked in good and tight,
and you can kiss your ass goodbye.

The government is just a cartel,
running drugs in every hood.
And if you think you can escape,
then the CIA ain’t doing what it should.

Oh, we’re the good guys, that’s for sure,
and you can take that to the bank.
Just don’t try to cash the check,
because it ain’t even worth a franc.

U.S. Ends Its War in Afghanistan

President Barack Obama has decided to keep nearly 10,000 U.S. troops in Afghanistan after 2014, but then quickly pull them out over two years.

The U.S.-led coalition in Afghanistan ended its combat mission Sunday, marking the formal—if not real—end to the longest war in American history.

Ah…SENTINEL! What does that word mean?

verb
1.
station a soldier or guard by (a place) to keep watch.

So, they’re now calling it ‘Operation Freedom’s Sentinel’. Well, we know ain’t no goddamn ‘freedom’ of Afghan people going on, not as long as even 10,000 U.S. troops aka whores are stationed in Afghanistan. What I do know is that since the U.S whores have been stationed in Afghanistan, poppy production has skyrocketed. So, it would appear that what’s being freed is the poppy plant and so since it would appear that the poppy plant seeks freedom, there must be a sentinel to protect its freedom, thus ‘Operation Freedom’s Sentinel’ was born. Stand guard over the poppy until the poppy is ready and then when it’s ready, give it a nice ‘free’ plane ride outta Afghanistan. I gotta hand it to ’em, they got a way with words. They fucking spin it ’til the majority of Americans are too goddamn dizzy to see what the hell they’re up to. No worries, step right in, I’ll stop the fucking spin!!

10 thoughts on “The War In Afghanistan Is Not Over!”