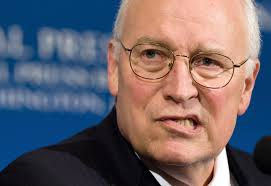 You are the poster child for torture.

And yet, you never miss a beat.

You’d torture your own mother,

When I look at evil’s face,

your mug shot should appear.

And behind stout prison walls,

your ass should disappear.

Why can’t you breathe your last

and save us all the trouble

of waiting for your death?

But I bet you’ve got a double.

of how you got away with torture,

as though you walk upon a cloud.

The likes of you, I have never seen.

And whatever put you here.

I wish it’d claim your ass,

then let’s see how much you sneer!

Cheney on TORTURE: ‘I Would Do It Again in a Minute’

Former Vice President Dick Cheney on Sunday continued his fierce defense of harsh CIA TORTURE used in the wake of the 9/11 attacks, saying flatly that he “would do it again in a minute.”

The former vice president added that he was not concerned about the capture or TORTURE of foreign nationals who were ultimately revealed to be innocent.

..and about rectal rehydration? “I believe it was done for medical reasons” — a notion that has been questioned by medical experts.

The former vice president also hit back against the report’s claim that President George W. Bush was misled about the extent of the practices.

“This man knew what we were doing,” he said, outlining daily briefings that included the president, the CIA director and himself. “He authorized it. He approved it.”

Here we sit, wondering why ISIS and IS and The Backyard Beheader’s Club and Beheader’s Anonymous groups are gaining traction via membership drives from countries all across the world, if the lamestream media is to be believed. I do not wonder why America has so many enemies. I would be America’s enemy too if shit like this was sitting somewhere condoning torture and trying to put a spin on it and call it, ‘interrogation tactics’. They can do the dirt without even flinching but to sell it to the stupid sheeple called Americans, they’ve got to pretty it up and call it ‘interrogation tactics’. It was TORTURE, goddamn it! Plain and simple, it was TORTURE! They detained and TORTURED INNOCENT people and they continuously place the blame on 9/11 as if that excuses all war crimes, torture and detaining of innocent people in prison hells for years without due process. That makes it alright! WRONG!! So, America is going to forever claim to take the ‘high road’ and deem TORTURE a necessity because of 9/11? And quite actually, it is working. Tout out 9/11 and there’s your free pass to TORTURE. There’s your free pass to FORCE FEEDING SOMEONE THROUGH THEIR ASS! There’s your free pass to DETAIN SOMEONE AND TORTURE THEM INTO CONFESSING WITHOUT A LAWYER PRESENT! Did you get that? This is what America stands for! How much bravery is displayed by Americans when they are torturing helpless captives? How can we claim to stand for freedom when we deny people their freedom just because we can? How can we claim a moral superiority when we have no morals? When we have no scruples? This is the home of the brave? Are you fucking kidding me? Dick Cheney probably is wetting himself through a diaper when looking at the photos of tortured assholes, fried genitals and dead, staring eyes because those people weren’t guilty, they’re scapegoats for lascivious eunuchs that can only get their jollies off by extreme masochistic shit!

4 thoughts on “Let’s See How Much You Sneer!”