Read the article and then contact the Sullivan County Sheriff’s office in Sullivan County Tennessee and ask for this military hero’s inmate number and mail him some money for commissary. Also, his bail has been set at $1 million and so let’s get it paid since we voiced NOT one complaint when the U.S. military was training him to become a hired killer. We should have no complaints or whines about paying for his release so that we can host a parade for this military hero in every city and in every state in the land of patriotic, hypocritical bullshit!

Outfitted in camouflage and armed with a high-powered rifle and 100 rounds of ammunition, Robert Seth Denton fatally shot his mother, stepfather and grandmother while six children witnessed the carnage in the family’s double-wide mobile home in eastern Tennessee, a sheriff said Monday.

The 19-year-old suspect then went outside, laid down his weapon and camouflage jacket and walked to a neighboring trailer, where he told his grandfather he needed to call 911, Sullivan County Sheriff Wayne Anderson said.

Oh for crying out loud!!! What’s a little first-degree murder? What’s a little aggravated assault? What’s a little reckless endangerment? This is what we paid him to do! Why do we expect him to be able to differentiate between the ‘good’ guys and the ‘bad’ guys after we have turned him into a ‘killing machine’? This military hero should NOT be cooling his heels inside a jail. Now, where are the Veteran’s Day flag-waving morons that sit on the sidelines and cheer for heroes such as this one? Where are all the Memorial Day flag-waving morons that sit on the sidelines, eating hot dogs, apple pie and waving that patriotic rag, called the American flag? This hero could surely use your help in his hour of need. What is he guilty of? Murder? Why, MURDER is sanctioned by YOU! You would be ‘thanking’ him if he had killed some folks in the Middle East! What’s the problem? He can kill THEM, but not YOU? What makes YOU special? “You’re ‘family’,” you say! Well, apparently, someone was TOO late in telling Robert Seth Denton! And look at his mug shot! Not a hair out of place after having murdered three family members, been shot by his grandfather, taken to the hospital, treated for a gunshot wound to his arm AND arrested.  Do you have ANY idea what a Negro would be looking like right about now if HE had done THIS to a Caucasian family? Of course you do! He’d have been riddled with bullets and looking like Swiss cheese on a slab in the morgue and don’t you know it! But it was an obvious case of ‘easy does it’ with this Caucasian military hero! Now, get out your wallets and ‘bail’ this hero out!

“We have gained a lot of information that he has hated his mother for most of his life,” Anderson said. “He had made statements … over the years that he wanted to kill her.”

Authorities said the suspect had served a short stint in the Army, but didn’t provide any details about his work history outside the military.

Now, THAT is interesting. This military hero ‘hated his mother for most of his life’, and did nothing about it until he ‘had served a short stint in the Army’. Hmmmm….I am just NOT getting the connection! Is anybody getting the connection? Say what? The connection is that he already had feelings of ‘hatred’ for his mother and then the U.S. military trained him to be a killer and now it’s, “Bye-bye mommy and step-daddy AND granny!”

Robert Seth Denton, military hero, was only 19. It is my understanding that he could not have joined the military until he was 18 and at 19, he is in jail for murdering his mother, his stepfather and his granny? All I can say is, “He sure as hell learned quick!” Did he take the Army’s ‘Accelerated Killer Training Course’? Let me get this straight, he joined the Army at age 18 and at age 19, he is arrested for murdering three relatives while most of his siblings looked on. My guess would be that the silver lining to all of this is that he did not turn the gun on his siblings and their visitor and murder them as well.

A relative of the victim is questioning, “Why?”

I have a suggestion, call Obama, he was this young man’s Commander-in-Chief and ask him why! Ask him why AmeriKKKa suits up her youngest and most fragile, turns them into killers and then lets them loose on unsuspecting people. Ask Barack Obama and John McCain and Lindsey Graham why your relatives are dead. Ask the other warmongers why your relatives are dead. Ask the AmeriKKKan people why they insist on worshipping killers; touting them as heroes and warriors for killing innocent people in foreign lands, but when they bust a cap all up in an AmeriKKKan ass, it is considered to be such a tragedy. No it’s not! Because if you consider this to be a tragedy then you would not continue to condone the training of your youth to kill. You would not continue to aid and abet this shit by celebrating with hotdogs, apple pie and parades that honor these trained killers!

Did you honestly think that the killing fever would leave them once they left boot camp? Once they returned from overseas military deployments? Once they have been taught to kill, kill, kill? Are you fucking serious? 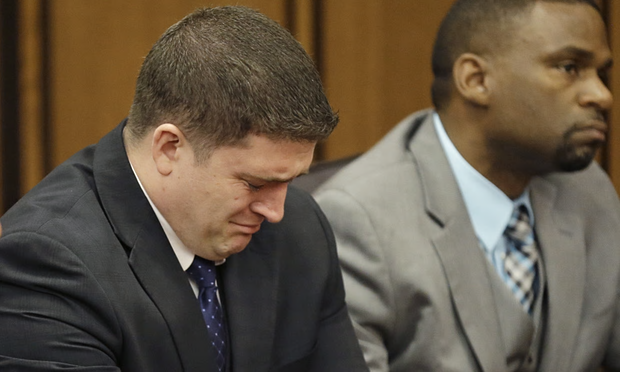 Brelo, 31, joined the Cleveland police department in 2007, having served in the marine corps in Iraq. He was charged with two counts of voluntary manslaughter. Each count can carry a sentence of three to eight years in prison.

Brelo’s trial resulted from a police chase on 29 November 2012, when Malissa Williams and Timothy Russell led police on a 20-minute pursuit that involved 60 police cars and about 100 police officers. The chase began when their car, a 1979 Chevy Malibu, apparently backfired as it passed police headquarters in downtown Cleveland. THE NOISE WAS MISTAKEN FOR A GUNSHOT!!!!

Because of a fucked up car backfiring, these two Negroes, Malissa Williams and Timothy Russell, were executed by an ex-marine turned killer cop and cleared of manslaughter charges! WHY? Of course no one is asking why this happened to these two because they had criminal records and so that right there gives Officer K.K. Klan every excuse in the world to execute them. And I will state it again. Malissa Williams and Timothy Russell were EXECUTED BECAUSE THEIR FUCKED UP CAR HAD THE AUDACITY TO BACKFIRE IN FRONT OF ‘OFFICIAL KLAN HEADQUARTERS’! That was against THE LAW AND PUNISHABLE BY FIRING SQUAD, which commenced all on their ass. Their car backfired, it was discovered that they were Negroes and it took 60 official Klan cars and about 100 official Klan officers to chase them and this particular piece of filth, Klan-Brelo, thanks to his MARINE, training went above and beyond the call of his ‘nigger killing duty’ and jumped up on the hood of the piece of shit vehicle and EXECUTED two negroes by firing his gun 49 times through the windshield at these two unarmed passengers who were shot at at least 137 times by the ‘official nigger killers’.
“Malissa and Timothy, there is no reason in the world for me to wish that you are resting in peace, for how could you?” And it would be no comfort for you to know that these military whores are also coming back from deployments or from boot camp and filling their own family members with bullets. It would be no comfort to you at all, but they are doing it and they will continue!” 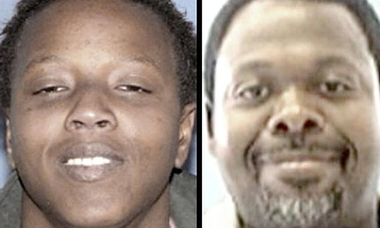 If only Robert Seth Denton had joined the police force, he would be walking free!

So, continue to celebrate your flaming hypocrisy AmeriKKKa! Continue to consider yourselves to be blameless in what you enable, honor and worship and you will also continue to ask the question, “Why?” when the shit hits the fan, but ONLY when it hits the fan over some Caucasoid murdering his own family. Hug your killer boyfriends and husbands and sons and nephews when they step off the plane or when they return to you from ‘boot camp’. Yeah, you hug those killers and get out the Stars and Stripes and wave it back and forth, thanking them for killing you because YOU’RE NEXT!

Now, write in your will that you want to ‘thank’ ALL military personnel for their service in busting a cap all up in your ass! Bequeath to them some more of your money for commissary and bail because they are heroes, doncha know and then you can ‘rest in your peaceful dead slumber’, you stupid AmeriKKKan motherfuckers!

13 thoughts on “This Military ‘Hero’ Needs A Defense Fund!”