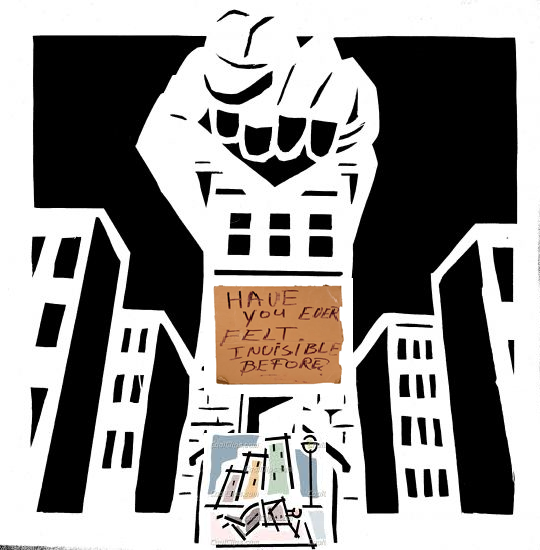 I long for a home, but where is unknown.
Seeds of hope are scattered but are never grown.
Homelessness, it is a state of mine.
Please take a moment and read my sign.
In whatever state, I happen to be,
you look anywhere, but not at me.
I don’t haunt your thoughts; not at all.
There is a barrier between us, as high as a wall.
It keeps me out and it locks you in.
But that wall, it’s shaky and so very thin.
One day it might crack and let one of us through.
Will it be me or will it be you?

Just a little something to think about.

“People from the suburbs have started coming into the city to buy cheap property. But they want the homeless out of sight and out of mind. Don’t forget ‘gentrification’ is rooted in the word ‘gentry’. St Louis’s gentry, rich suburbanites, move their problems to our backyard and then they want to destroy our yard because they don’t like the people living in it. They’re hateful, vindictive, and vicious. They’re all white people, and they like to think of themselves as white progressives. But all problems have to be in someone else’s backyard. It’s a very racist issue.”