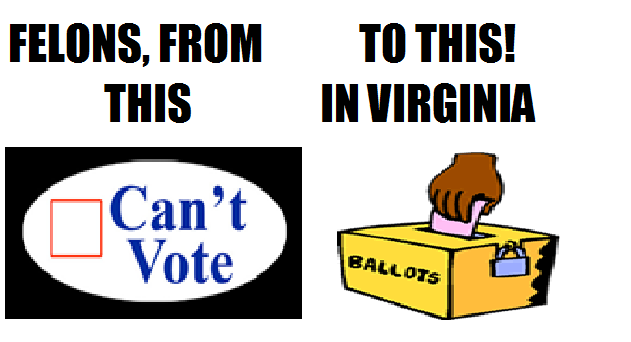 RICHMOND, Va. (AP) — More than 200,000 convicted felons will be able to cast ballots in the swing state of Virginia in November under a sweeping executive order Gov. Terry McAuliffe announced Friday.

The Democrat said restoring the rights of felons to vote and run for office will help undo the state’s long history of trying to prevent African-Americans from fully participating in our democracy.

“This is the essence of our democracy and any effort to dilute that fundamental principle diminishes it, folks, for all of us,” McAuliffe said on the steps of Virginia’s Capitol, before a crowd of more than 100 people that included many felons.

Now, of course, we are all wondering if the restoration of voting rights to felons has anything to do with the upcoming presidential elections, but let us just believe that he(democratic Governor, Terry McAuliffe) is doing this because it is the right thing to do. If a person has committed a crime and they have served their time, then the right to vote should not be withheld. They are certainly expected to pay taxes upon completion of serving their time. And so, they should be well within their rights to expect to ‘think’ that they have some say in who is going to enact laws that they must obey, especially seeing as how, egregious laws most likely got many of them stiffer sentences than they otherwise whould have received.

The Virginia republican camp is already crying, “Foul!” But be that as it may, for now, it stands and the squirming by the republican legislators in Virginia will, of course, continue. They want every single Virginia vote to go to their presidential candidate and seeing as how there is much turmoil in the GOP camp these days, is it any wonder?

What I would like to add is this, to all the convicted felons who have regained the right to vote, think twice about who you intend to cast your vote for. Do not just assume that by checking the box next to the democratic party’s candidate that all will be well. If Hillary Clinton receives the democratic nomination, then remember this, she and her husband Bill Clinton are most likely responsible for why you were incarcerated for years longer than you should have been and also for your receiving a stiffer sentence than you should have received. Never forget Bill Clinton’s legacy and how his policies decimated Black America even as he was re-directing jobs from America to Canada and to Mexico by way of NAFTA(North American Free Trade Agreement). But what is really the sticking point is that that douchebag pedophile, Bill Clinton, implemented the ‘three-strikes law’, a $30 billion dollar crime bill that created dozens of new federal capital crimes, mandated life sentences for some three-time offenders, and authorized more than $16 billion for state prison grants and the expansion of police forces. And by the time Bill Clinton left office in 2001, the United States had the highest rate of incarceration in the world of mostly Black prisoners. And what’s more, Hillary Clinton stood behind this and actually encouraged it. Where do you think the ‘Blacks are super predators and need to be brought to heel’ speech came from? This shit was vomited out of her filthy mouth! And this was said while she lauded her husband, Bill’s crime law that got you mandatory minimum sentences for being caught with a plant(weed) and for being addicted to heroin and crack. No rehab for you! Go straight to prison and remain there, indefinitely!

A vote for Hillary Clinton is a vote for more of the same. They are two sides of the same coin; they are not any different from each other. Hillary Clinton is saying what she thinks she needs to say to ‘court the Black vote’ but you are just a worthless piece of stinking manure in her eyes. You are not fit to breathe the same air she does, is her opinion. She needs your vote and so she will grin and bear being in the same room with you, only up until she receives the democratic nomination and descends to the presidency. Because the office of the president of the United States is not an ascension since warmongers, war hawks and war whores such as Hillary Clinton have long since climbed into bed with those who profit off wars. And Black folks, this is why they have made it so that you feel you have no choice but to sign on the dotted line and fight rich shits wars who want you dead anyway. This is why the only other option for you is to duke it out with guns on every inner city corner in AmeriKKKa over drug turf. This is why Black America, you were chronically hooked on drugs, but you were criminalized for your habit while white folks were and are receiving drug rehab, politician handwringing and even CDC investigations over their supposed increase in death by heroin overdoses. Meanwhile, cities like Baltimore, MD has for decades been dealing with a heroin and crack epidemic and was left to rot, decay and fall into ruin and her citizens, into despair, hopelessness, anguish, heartache and death.

Make no mistake, the democratic party and Hillary Clinton are not here to save the day for you. Your day is fucked up because of them. Vote with your brain. Educate yourselves before you head for the polling stations and try and remember that you owe nothing to those assholes! They promise you shit that they have no intentions of delivering on and by now, you should know this. You are only a pawn to be used in their ‘game of thrones’. Stop selling yourselves to these bastards that think more of their pets than they do of you!

Whatever Terry McAuliffe’s reasons for re-instating the vote to 200,000 felons, make sure that the vote you cast is not because of some misguided deep-seated belief that the democrats are your friends and therefore, will forever deserve your unwavering and loyal support. Surprise their ass! Wake them the fuck up and make them no longer take your vote for granted!

Hillary Clinton has already called us Black folks, ‘super predators’ that need to be brought to heel. Show that foul warmonger that the biggest super predator is her racist ass and that THIS time, you are NOT to be taken for granted!

I can only hope that you get the message!

#HERjournal
Musings Of An Autistic Mind

Channeling my thoughts about the world outside, and inside, into prose and poetry