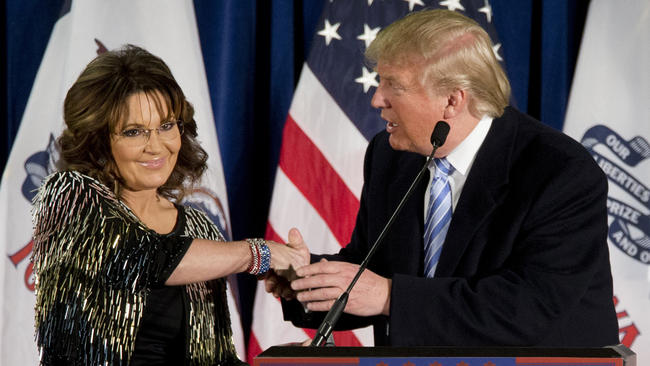 At an impromptu press conference held at Trump Tower in Midtown Manhattan yesterday, president-elect Donald Trump dropped a bomb with his announcement that the former governor of Alaska, Sarah Palin is his pick for Secretary of State. When describing her qualifications for this position, Trump had this to say, “As you all know, I am trying to repair America’s relationship with Russia and who better to get the ball rolling in that regard than Sarah Palin who actually golfed with Vladimir Putin from the governor’s mansion in Alaska. Sarah has told me all about the many times she looked across the pond that separates Russia from Alaska and saw Putin playing golf on the front lawn of his estate. She told me that they developed a certain rapport whenever the ball went into the hole, Sarah, here would call, ‘Love 15!’ and Putin, upon hearing this would answer back, ‘Love 30!’. The two would then wave one final time at each other before disappearing inside their respective mansions. Who better to get America’s relationship back on track with Russia than Sarah Palin who is already fondly perceived by the Russian president? And before you get started on the fact that Sarah Palin has no experience for this position, remember that I am not completely stupid. I did give Sarah a test and she passed with flying colors. I asked her to find Alaska on the map and she pointed to it easily enough. She actually pointed to New Zealand but she explained to me that if I fly from New Zealand by way of Amsterdam, I would arrive in Alaska by 6pm eastern standard time if I depart at 4pm New Zealand Kiwi fruit time. I must say, I am quite floored by Sarah’s abilities and I think she has gotten a raw deal in the past by the press. And so without further ado, I shall hand the microphone over to my new Secretary of State, Sarah Palin! A round of applause, please!”

“Thank you! Thank you Donald! I am underwhelmed and I promise to do a wonderful job as Secretary of State, but to be fair, if Hillary Clinton and John Kerry can do it, I see no reason why I cannot. I think that I am more qualified than those two. They are responsible for the current hostile climate between the Soviet Union and Russia. I am so glad that Hillary is not the president, she never liked me anyway, and that John Kerry person is going to have to relinquish the Secretary of State jet to me. He, with his long face did not go well in a such a wonderful mode of transportation, nor has he exhibited one clue as to how to reign in those pesky insurgents that have been relentlessly fighting our own terrorists in the Middle Eastern country of Berlin. When I am Secretary of State, I promise to get everyone in Stockholm at the table and make them understand that they will no longer get away with harboring those Yemini terrorists that they think we don’t know about. I was watching a documentary the other day on the Discovery Channel and you would not believe how many terrorists are hiding out in  the Swiss Alps. Why, there were twenty-two female terrorists participating in some sort of ritual, kneeling by a creek and rinsing their hair and toweling it dry and I said right then and there, ‘look at that, they are attempting to fool everyone into thinking that they are merely washing their hair when we all know that they are the wives of ISIS members’.”

“I have already been in contact with the UN and I let them know that we will get NATO forces together and prepare to bomb Berlin from France and we will be successful in removing the command center for terrorists in that country. I am going to put ISIS on the run, for good. I am going to make you proud of me Donald. You are going to be so proud of me that when you win a second term, you will want me to continue on as your Secretary of State! Take that Hillary ‘has been’ Clinton!”

“Next week, I am scheduled to fly to Iraq and once I land in Iraq’s major city, Aleppo, I will drill our troops there and get to the bottom of why Iraq is still a hotbed of terrorism. We will brainstorm and find a way to get Toyota to stop doing business with IS and then since those terrorists will have nothing to drive once Toyota stops supplying them with pickup trucks, we shall bring peace and prosperity back to that region. I shall also call on Saddam Hussein to step back in as the leader especially seeing as how Pakistan was doing wonderfully when he was the dictator there. Those CheeseKurds, Soonistas and Sheisties will soon know who’s boss. And if Hillary hadn’t killed Ghaddaddy, Libya would not see me, but I must do what I must do and Libya will be my next stop because I must find a way to run the rebels out and return Libya to Ghaddaddy’s son, Alibaba. It is too bad that he has forty thieves in his regime, but there are going to be some bad guys and sometimes, it takes one bad guy to get to the other bad guys and we must depend on a bad guy at times to make sure that the other bad guys don’t get out of control. So, Alibaba and his forty thieves will run Libya. I have almost achieved world peace because Putin has already assured me that he is returning Ukraine back to Crimea and he has also agreed to allow Petroclevoceous, the former ruler of Spain to return and guide the Slovakian people back to Yugoslavia.”

“So, gentlemen of the press, my new outfits are being prepared as I speak to you and just as soon as they are all ready for me, I shall be on my first world peace mission. And Donald, thank you ever so much for giving me this opportunity to prove that I have more than just air between my ears! Suck on a lemon Hillary!”

21 thoughts on “Donald Trump, “Sarah Palin To Be Secretary of State!””