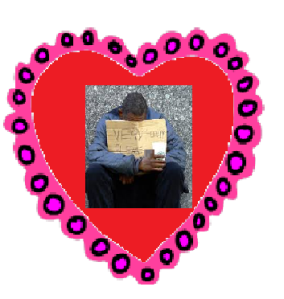 This would be as good a day as any to take that money that you intend to spend on your ‘valentine’ and spend it on helping out a homeless person and before you start in about how the homeless would just spend it on alcohol or drugs, take a minute and think about what you intend to spend it on. A nice bottle of wine, perchance? Or how about a little pick-me-up pill called Viagra or Cialis? Are they not drugs? You see, when we want to feel all self-righteous about what we do as opposed to what someone else does, then we fail to realize that we are doing exactly what we are castigating others for doing. Most of us have a vice and some of us have more than one. I freely admit to mine. It is champagne and I am going to practice what I preach and ‘valentine’ a homeless person. And it doesn’t matter if you have no ‘valentine’ to celebrate Valentine’s Day with.

The point is that there are people who are living on the mean streets of every shitty city in America and they will not get a box of chocolates, nor will they get a bouquet of hothouse flowers. They will not get skimpy, libido enhancing lingerie. Hell! What would they do with that anyway? If you cannot bring yourself to give the homeless, cash, then why not ‘valentine’ them a gift card? There are gift cards for Starbucks, Ruby Tuesdays, Applebee’s, AMC theaters and a host of other stores and restaurants. Or how about gifting the homeless with a brand new blanket or handing them a cup of coffee or some new socks. No, it will not solve the problem of homelessness, but it will most likely make a difference in their lives to know that someone thought about them for a change. And if you told your ‘valentine’ what you did with the money that you would have spent on him/her, chances are, you’ll both be on cloud nine on Valentines night.

So, this year, why not do things a little differently? ‘Valentine’ a homeless person, it will certainly help them and it wouldn’t hurt you.

Valentine the homeless and make this their day.
Who needs lingerie when you’ve seen it anyway?
Please use your heart and give your lust a rest.
Help the unfortunates; those who aren’t blessed.
That box of chocolates will just make her fat.
And if you give him boxers, he’ll really hate that.
Since you love one another, you don’t need a gift.
But those who are homeless, could sure use the lift.
In the spirit of the day, think of those out in the cold.
I said, “Love one another!” if I may be so bold!

Since you’re hell bent on making corporations happy, at least try and make it count for something.
—————————————————————————————————————–
This post is getting a lot of attention and I thought that since it was well-received when I originally posted it, this would be the perfect time to re-post it and hopefully shine an awareness on the serious issue of homelessness as we celebrate Valentine’s Day in one of the coldest months of the year. Please take time out of your busy schedule to notice those who are less fortunate and at least offer them a hot cup of cocoa on a cold winter’s day. It will be most appreciated. Believe me, I know. I have been homeless.

8 thoughts on “Valentine The Homeless (A Re-post)”