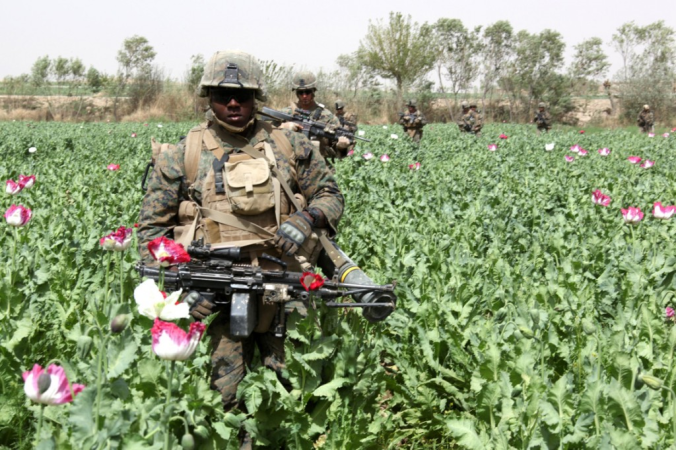 Why oh why am I not surprised? Maybe this will help explain things. And this!

Trump Weighs Sending as Many as 5,000 More Troops to Afghanistan

The Trump administration is weighing a drastic change when it comes to Afghanistan: Whether to send as many as 5,000 more troops in the fight.

A U.S. official told The Post that Trump wants to “start winning” again.

In my post titled “I Make Thirty-Eight Thousand Dollars A Year!,” I gave the average dollar amount U.S. soldiers sent into Afghanistan make and that dollar amount is $38,000 plus medical, housing, uniforms, a coffin and a flag to drape over that coffin when they bring your dead carcass back to the states for burial. And what a solemn ceremony that will be. It won’t however, be attended by any of the top brass. You know, the ones who sit in their ivory tower and give the go-ahead to send some stupid schmuck like you, who doesn’t know any better to fight uh…let me see. Fight who or whom? Who are you fighting? You don’t even know. You just suit up like the good little robotic, stupid schmuck you are. Are you fighting the Taliban, ISIS, Ali-baba and the Forty Thieves or just some camel herders? You don’t have a clue who you’re supposed to be fighting in Afghanistan and what business is it of America as to what goes on in Afghanistan? That country is nowhere near the U.S. and so what affects that country cannot possibly have an effect on this one seeing as how the Taliban has no need to come over here and fuck shit up. This shit is already fucked up over here. This country is over $19 trillion dollars in debt, healthcare is a no-show for millions, homeless tent cities are forming daily, food lines are looking like Depression era bread lines, retail stores are shuttering their doors in unprecedented numbers, entire cities are declaring bankruptcy and even Puerto Rico is bankrupt, car manufacturers are shuttering their doors this summer and car dealerships are begging people to buy cars because their inventory is bloated, but we are told to worry about the Taliban? And so suit up and get the hell over to Afghanistan and fuck shit up over there because goddamn! The U.S. should not be the only country that’s fucked up. Hell! Misery loves company, doncha know! And like the good little sheeple you are, you will do as you are told.

But guess what? America CANNOT win a war in Afghanistan, just like America couldn’t win the war in Vietnam and it didn’t win the Korean War. The U.S. is once again, bogged down in a quagmire and those who send the cannon fodder to fight their wars don’t have a problem continuing to commit insanity which we all know is ‘doing the same thing over and over again and expecting different results’. And quite obviously, many Americans are insane since they have no problem following the orders of the insane. How many U.S. soldiers coming back in body bags will it take to wake the American people up? How many soldiers have to get themselves in the news for going bat shit crazy and riddling their family members with bullets before you realize that this could all have been avoided?

Didn’t Trump just drop the (MOAB)Mother Of All Bombs in Afghanistan? So? What did that accomplish? Didn’t he think that would make all the difference in the world? To send the biggest non-atomic bomb to Afghanistan, drop it and voila? Problem solved, right? Wrong! Now, it’s back to deploying more cannon fodder because the MOAB didn’t accomplish a damn thing. So, what did the MOAB do? Leveled a few caves. That’s what it did. Ain’t that something? How much did the MOAB cost that merely leveled a few caves in Afghanistan? One website reported the MOAB costing $16 million, another one cited $314 million and one claimed it cost $341 million. The exact number doesn’t really matter. What matters is that whatever the cost of this bomb, it didn’t do a damn thing about a damn thing! You have read not one report that this massive bomb had a devastating impact on the so-called Taliban or even ISIS in Afghanistan because if it had had any effect at all, why would Trump contemplate sending an additional 5,000 American soldiers into Afghanistan? Trump is adhering to the script as written by the warmongers who play these little games with the stupid American sheeple whereas they pretend to do one thing while actually doing another. When they tell Trump to send a massive bomb over to Afghanistan, it was to make you think that the focus in that country is to go after some folks who are just too horrible for words because the Afghan government just cannot do what? Something? Anything? Nothing! And Americans don’t even question the obvious ridiculousness of all of this. Guess what massive bombs cannot do? They cannot protect poppy fields. Only ‘sentinels’ can do that. Remember when Barack Obama claimed that he was exiting all troops from Afghanistan since the war in Afghanistan was at an end and then changed his mind and decided to leave 10,000 troops there? Well, it turns out that he called the plan “Operation Freedom’s Sentinel.” So, again, since the war in Afghanistan ended, then why the necessity to keep even 10,000 U.S. soldiers in Afghanistan?

U.S. Ends Its War in Afghanistan

President Barack Obama has decided to keep nearly 10,000 U.S. troops in Afghanistan after 2014, but then quickly pull them out over two years.

The U.S.-led coalition in Afghanistan ended its combat mission Sunday, marking the formal—if not real—end to the longest war in American history.

But now, all of a sudden, there is still a war going on in Afghanistan. Why? Because there has to be a name for something that is so filthy and dirty and immoral and disgusting so that it will go over well with the American people. And what do Americans love? Violence, war, death, destruction, fighting, dying, lies, hypocrisy, drugs, especially drugs and guess what Afghanistan has? Drugs! Poppy! Opium! Heroin! Morphine! Codeine!

Opium is a substance that is derived by collecting and later drying the milky juice that comes from the seed pods of the poppy plant. The primary component of opium is 12% morphine which is an alkaloid that is often processed chemically to produce illegal drugs such as heroin. Codeine and other non-narcotic alkaloids are also found in the latex that is derived from the opium poppy plant.

“Yeah! Let’s call what we are doing in Afghanistan, a war. Yeah! That sounds great. We are fighting a war against a most horrifying enemy. And folks, that enemy has several different names we’ve given it; The Taliban, ISIS, Ali baba and his forty thieves, The Infidel Hater’s Club, it don’t really matter what we call them, the American people love war. Hell! The cannon fodder don’t kick up a fuss one bit, they just head for the airfield, and overseas they go! Dumb schmucks!”

But what’s really going on folks is that the government has always been the biggest drug cartel on this planet. Oh, we see documentaries on the Mexican and Columbian drug cartels and such like, but that’s just the U.S. government’s competition. They’re small fry compared to what the government officials make off peddling opioids in every form. When the heroin addicts are so-called ‘in recovery’, what do you think the government hands them? Why, another opioid, of course, ‘methadone’.

Now, what is methadone?

Methadone is an opioid medication. An opioid is sometimes called a narcotic.

So, to get an opioid addict off opioids, the answer is to give him/her more opioids? And only the government is allowed to give out methadone. The ‘former’ heroin addicts line up at the methadone clinic to get their daily dose of another opioid to combat the withdrawal symptoms of an opioid. How does that work? Who wins? Certainly not the addict. Is the picture becoming clear to you yet? Are you still left wondering why the U.S. government is hell bent on ‘pretend’ bombing its way across Afghanistan even after it has been stated that the war is over? Are you still wondering why ‘Operation Freedom’s Sentinel’ was born? What does a sentinel do? It stands guard over something. And what is there to stand guard over in Afghanistan? Caves? Camels? Hell no! Poppy fields, is the answer! Opium! Morphine! Heroin! Methadone! The ‘Mother Lode’! You can bet your candy ass that the Mother Of All Bombs was dropped nowhere near a poppy field. Trump would have had the MOAB dropped on your sons first because your stupid sons just don’t matter. But never will he ever drop a bomb on those poppy fields because the poppy is precious. Your sons? Not at all!

And when you view another commercial about how serious they are taking this opioid epidemic, you’d best laugh because to them, it is a joking matter. That drug; that poppy plant over in Afghanistan is making some folks extremely rich. But what it’s doing to America’s sons and daughters is no laughing matter. Your government has declared actual war, not on the Taliban in Afghanistan, but on your ass; twice over. In Afghanistan, in the form of U.S. soldiers getting deployed and dying for nothing and here in America by enabling you to fill that prescription for some opioids and now that so many people are overdosing and this fact cannot be shielded from the public any longer, they’ve now decided to pretend that there is some concern over this epidemic of overdoses of ‘white’ folks all across America. But know this, if they were really concerned about the opioid epidemic, U.S. soldiers would have been pulled completely out of Afghanistan and Trump would not be contemplating how many U.S. soldiers he’d like to send into Afghanistan. We’re fighting the Taliban? Sure, we are! And if you are stupid enough to believe that load of horseshit, then I’ve got a bridge in London I’m selling dirt cheap!

11 thoughts on “So, More Stupid Cannon Fodder Is Headed To Afghanistan?”