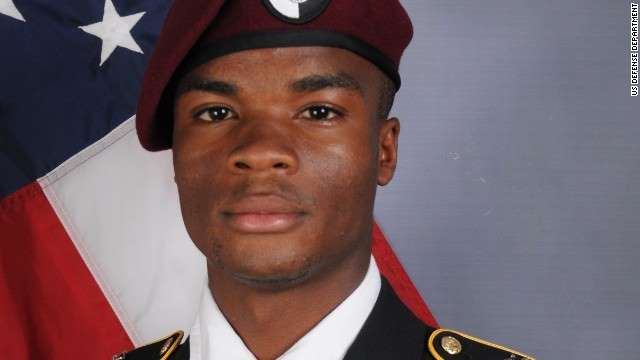 Donald Trump speaks the truth AGAIN and AGAIN the fallout is unbelievable!

President Trump told the widow of one of the soldiers killed in Niger that he “knew what he was getting into,” said U.S. Rep. Frederica Wilson (D-Miami), who said she was in the car where the phone call was received.

Army Sgt. La David Johnson was purportedly in Niger advising local troops on how to counter Boko Haram and al Qaeda when he and three other American soldiers were leaving a meeting whereupon they were shot dead. So much for their role as ‘advisers’. Now, we are not focusing on exactly why the government of Niger is in need of America’s military to advise them on how to handle their own business, issues or problems that’s got nothing whatsoever to do with America. We are to focus on what Donald Trump is alleged to have said to a widow about her dead husband.

Black-assed, dead Army Sgt. La David Johnson had no business in Niger in the first place. What happens in Niger is Niger’s business and yet, Sgt. Johnson was in Niger minding Niger’s business and in the process, got himself shot dead. Is America at war with Niger? Has anyone in Niger sent a missile to America? Has a ‘terrorist’ from Niger escaped Niger’s officials, boarded a plane, landed in America and promptly shot up hundreds of people as was the case with the ‘white’ terrorist that did exactly that in Las Vegas a few weeks ago? Uh…that would be a resounding “NO!”

So, yes indeed, Sgt. Johnson got exactly what he signed on the dotted line for. He signed on the dotted line to KILL OR BE KILLED and so no one should be surprised at all that Sgt. Johnson was killed. He had a gun, did he not? He was taught how to use that gun, was he not? And so whose fault is it that the other guy got the upper hand on Sgt. Johnson? It was Sgt. Johnson’s fault. No one told him to have eyes in the back of his head? No one told him that everyone he meets is presumably an enemy? So, keep your head low and your gun ready? Too bad, so sad, shit happens, right? Right!

Now, let’s all get bent-out-of-shape because Donald Trump told Sgt. Johnson’s widow that he “knew what he was getting into,” because Sgt. Johnson’s widow did not know did she? Of course she did! Did she think that Sgt. Johnson’s checks were issued on his behalf for reparations? No! Did she think Sgt. Johnson’s checks were issued on his behalf because he was providing modeling services for the U.S. military? No! Get real! Sgt. Johnson and his family were housed, fed and received medical coverage because Sgt. Johnson signed his body over to the elites killing squads known as the U.S. military. He signed any rights he had to live over to the elites when he signed the dotted line to “kill or be killed.” The elites don’t care about Sgt. Johnson, nor do they care about his widow and his children who are left behind to mourn their father who would rather be over in Niger minding Niger’s business over minding his own. No one forced Sgt. Johnson to sign on the dotted line. No one held a ‘gun’ to his head and made him fly over to Niger to ‘advise’ Niger’s officials as to how to fight who the hell knows who!

Did Sgt. Johnson know what he was signing up for when he enlisted? Damn right, he did! And for that he got just what every dead soldier receives; he got a flag-draped coffin. Now, whether or not his family received letter or a phone call from his commander-in-chief is anyone’s guess, but he got just what he signed on the dotted line for. So, if you don’t expect to get shot dead when you sign on the dotted line to “kill or be killed,” then don’t sign on the dotted line. I do understand that Americans are some stupid shits, but even this should be crystal clear to you. And if it looks to you as though those who send you to foreign lands to “kill or be killed,” don’t give a damn about you, it is because they don’t give a damn about you! Donald Trump was a draft dodger because he was not about to risk his neck for not a goddamn thing because why should his ass suit up and fight the elites wars? He thumbed his nose at “risking his life for love of country, freedom, liberty and justice;” because he knew what you can’t seem to understand in that these are mere useless words that have no meaning for the likes of Donald Trump and the elites who send other peoples children to die for no cause at all. This country has never stood for freedom, liberty and justice because this country has never understood what those words mean and so just how can you fight for something that has no bearing on a country you were born in? You cannot. You are not fighting to keep America safe. You are fighting for American hegemony; you are fighting for elites to own and control the world just as they own and control you! But because they feed you patriotic bullshit, you lap that shit up, swallow it down and beg for more and then get pissed off because someone stated the obvious to you; that you “knew what you were signing up for when you enlisted.”

You fight for something that never was. You are killed for nothing! There is no honor in dying for hypocrisy and that is exactly what you are dying for; for America to continue to reign supreme when it comes to hypocrisy. How can a nation that is filled with hatred, white supremacy, illegitimacy, stolen lands, stolen people, bigotry, prejudice, Jim Crow, slavery, racism and mass murder ever be synonymous with freedom, justice and liberty? It cannot, not when a gnat couldn’t wipe its ass on the amount of freedom, justice and liberty that can be found in America. You die because you are too stupid to see beyond the fake ass displays of patriotism; a flag that is literally dripping with the blood of Indians and slaves. You die because you are too blind to see past the first stanza of the national anthem; an anthem that pays homage to slavery, an anthem that you are supposed to sing proudly as you are led off to fight people you have never met and who bear you no ill will but yet, you expect them to not want to kill those who are in their lands minding their business. You die because you are too willing to be a tool for those who wouldn’t spit on you if you were on fire to help put it out but for whom you willingly and knowingly and with malice forethought sign up to do their dirty work and then when you are killed, they tell your family members, “He knew what he was signing up for when he enlisted.” Oh yes, he knew! And Sgt. Johnson signed up any way.

And for Black folks to take up arms in defense of this shithole called America is a disgrace to your slave ancestors who fought against the Americans; who fought with English soldiers for their freedom. Francis Scott Key who purportedly wrote the national anthem; the star-spangled banner, had his ass handed to him by a battalion of Colonial Marines; Black men who were fighting on the side of the English. Key was so pissed off that he got his comeuppance at the hands of Black men that he wrote, in favor of slavery, in one of the stanzas of the star-spangled banner, the stanza that you never heard sung by Whitney Houston, Mary J. Blige, Ray Charles, Queen Latifah, Alicia Keys, Jennifer Hudson, Luther Vandross, Beyoncé and others. Oh, no! You never heard this stanza being sung, but you had damn well better believe that those who sang the first stanza knew about this one!

And where is that band who so vauntingly swore,
That the havoc of war and the battle’s confusion
A home and a Country should leave us no more?
Their blood has wash’d out their foul footstep’s pollution.
No refuge could save the hireling and slave
From the terror of flight or the gloom of the grave,
And the star-spangled banner in triumph doth wave
O’er the land of the free and the home of the brave.

At Black people, especially those who should know better, I can only shake my head over their willful acceptance of third class citizenship in a country that continues to view them as slaves and will forever do so. You perform for Massa today just as your ancestors did hundreds of years ago, just as Sgt. Johnson did until he got what he signed up for. “No refuge could save the hireling and the slave from the terror of flight or the gloom of the grave.” No, indeed it could not! Just you ask Sgt. Johnson and his widow!

10 thoughts on “Trump To Dead Soldiers Widow, “He Knew What He Was Signing Up For When He Enlisted.””