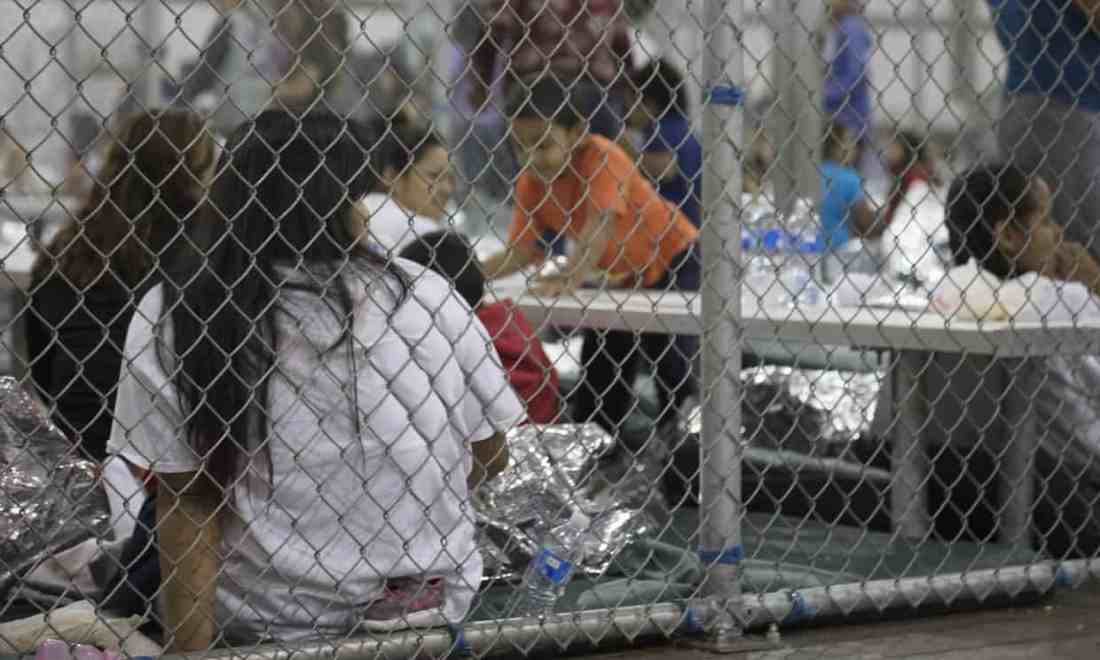 I have never heard so much whooping and hollering coming from ‘whites’ over migrant children being separated from their parents by ‘white’ U.S. border agents and yet, many descendants of slaves have probably married close relatives all because our slave ancestors were separated upon their arrival on these shores after having been dragged from their native land to be used as free labor. Slaves were stripped, chained and sold at auction as children were ripped and torn from their mother’s arms and yet we are to believe that ‘whites’ suddenly give a damn about family separations? For real? You nasty ‘white’ shits haven’t changed. You are still just as disgusting, vile and reprehensible as what spawned your evil ass!

I do realize that it has been stated that many of those who make the trek to America from south of the border are here because America has made it extremely difficult for them to live in their countries and because of drug turf wars. But be that as it may, ‘whites’ are responsible for this mess just as they are responsible for the fact of African children being separated from their parents. The ‘whites’ didn’t give a shit about family separation then, but now there has been an epiphany among the lot of them that is causing them to condemn the Trump administration’s attempts to separate children from their parents with ICE officials sending the parents back across the border without their children? Right! I’m buying that bullshit!

Oh the horrifying pictures of crying, screaming children is just heart wrenching to those who have no heart. ‘Whites’ have long looked on descendants of slaves being separated from their families with depraved indifference even up to present day because why else are there millions of Black mothers and fathers wasting away in ‘For Profit Prisons’ on bullshit drug charges if ‘whites’ are so concerned about family separations? You selective outraged shits are the very definition of hypocrisy from one end of this doomed shithole to the other. Why those people would want to come to this collapsing heap of putrid filth is a complete and utter mystery to me. For what they will find here is no ‘land of milk and honey’, but they will instead find ignorance, hatred, greed, selfishness, inhumanity, poverty, homelessness, starvation and hookworm.

But ‘whites’ are pretending to give a shit about some migrant children who are tearful at being separated from their mothers and fathers when they don’t give a shit for those who are legally in the United States and who are just as tearful and in need of  pity, help and some more shit! You skank ass filth is absolutely beyond the end of enough with your fake ass displays of outrage over what you set in motion. Those people are attempting to escape the traps you set for them, just as you’ve done to every other group who is not lacking melanin. You trap, enslave and destroy. That is the playbook you’ve always used and you’re still at it. You’ve not changed in all these hundreds of years. Why should you? If it works for you, what need have you to change a goddamn thing?

While those south of the border are coming here, you’re busy buying up the real estate where they came from and building gated communities, golf courses, tennis courts, spas and every damn thing else you need in order to lie around and live the ‘good life’ of relaxing at the beach, sipping an alcoholic beverage while your native maid cleans the condo and the native gardener is pruning the hedges for mere pesos, of course.

Oh how sad it all is that those poor little children are motherless and fatherless and wailing to the high heavens because they are so alone. But you’ve got plans for them. Of that, I am quite sure. How many of them have gone missing thus far? From what I hear, they’ve lost count because they are useful to you in some way just as the slaves were, just as Black prisoners are. But you’ve never shed one tear of outrage over the plight of the separated slave families nor have you shed one tear over the separation of families thanks to your ‘For Profit Prison Industrial Complex’ and you won’t because down to your very core, you are the most heartless, cold, callous, twisted, depraved deviants to ever slither and crawl across this godforsaken planet that you’ve made so thanks to the evil that is you!

What this world could have been like if ‘whites’ were not allowed!

The white savages killed off so many Indian tribes.

They stole their land with firewater and worthless beads as bribes.

The Indians never stood a chance against savages with a gun.

A bullet will always out pace a horse, even at a run.

An entire continent could not escape the thieving ways of man.

They plundered Africa’s wealth and stole its people for their plan.

With blood dripping everywhere, the savage whipped the broken slave.

We know who fucked the world up and who no good could ever save.

White savages will forever enslave all Black and Brown folk,

and if they rise to try to fight, they’re hindered by their yoke.

No good did ever come from the white savages rule on earth,

as they seek, destroy and kill amidst such peals of mirth.

Is it funny to this day, what those savages have wrought?

Do you find the time to laugh since in slavery, you’ve been caught?

When they finally destroy this world with their nukes and fracking sites,

will the last to close their eyes see beyond the mushroom cloud,

to what this world could have been like if ‘whites’ were not allowed?

Oh, I’m crying, alright! I’m shedding tears because dead ‘white’ filth was allowed on this planet in the first damn place! Yeah! That’s why I’m crying! Because if not for you, there would have been no descendants of slaves in this stolen land and there would be no migrant children wailing for their parents and there would not be millions of descendants of slaves behind bars kept away from their children thanks to yet another version of slavery and there would be millions of Indians still living as one on this land. But you worthless ‘white’ shits are in an uproar over what YOU set in motion? Get the fuck outta here with your fake ass displays of outrage, you hypocritical pieces of dead filth!