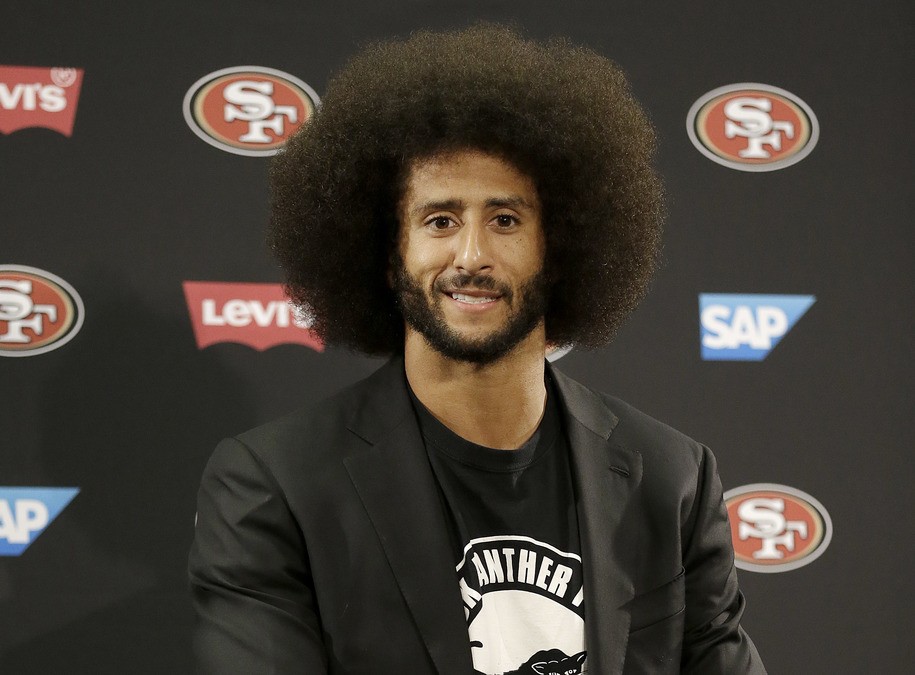 by Jessica Sutherland Daily Kos Staff Those who despise Colin Kaepernick—for his originally-silent and always-peaceful on-field protests against law enforcement’s rampant racism and unchecked brutality against people of color—are always quick to hide behind baseless accusations about what they believe are Kap’s real motivations. “He hates America!” some say. “He hates the military!” others shriek. All ignore the […]

This is an excellent read on Moorbey’z Blog that so succinctly points out the fact that white cops don’t even consider those who work on the force and are Black to be of any importance or consequence because they never even sought out the Black cops on the police force for their opinion before sending a letter to the ‘head honcho at Nike basically stating that, well read it for yourself:

“The inclusion of Mr. Kaepernick in Nike’s “Just Do It” ad campaign also perpetuates the falsehood that police are racist and aiming to use force against African Americans and persons of color. In reality, officers across the nation risk their lives not only protecting the athletes featured in Nike’s various campaigns, but also serve aspiring athletes across the country who use the Nike brand, through the thousands of Police Athletic Leagues, Boys and Girls Clubs and Big Brother/Big Sister programs where our officers donate their time and energy. They deserve to have the respect and full support of corporate citizens like Nike.”

Black cops participate in “Police Athletic Leagues, Boys and Girls Clubs and Big Brother/Big Sister programs” as well as “donate their time and energy,” and so what the WHITE KKOPS are saying is that THEIR time and energy is more important than Black cops’ time and energy simply because they are ‘white supremacists’ and Nike should act accordingly. How dare Nike disrespect ‘white supremacists’ by hiring a half-breed to promote their product who has stated that he took a knee in protest for, well, read it for yourself:

“I am not going to stand up to show pride in a flag for a country that oppresses black people and people of color,” Kaepernick told NFL Media in an exclusive interview after the game. “To me, this is bigger than football and it would be selfish on my part to look the other way. There are bodies in the street and people getting paid leave and getting away with murder.”

“This is not something that I am going to run by anybody,” he said. “I am not looking for approval. I have to stand up for people that are oppressed. If they take football away, my endorsements from me, I know that I stood up for what is right.” – Colin Kaepernick

There is NO pride in that racist emblem; the flag. It is drenched in Indian and Black blood and I would not stand and honor that shit any more than I would give a sip of water to a dying white man in the middle of the Sahara Desert. His depraved and thirsty ass would end up being deader than dead can ever be dead! There is no pride in joining the military to kill people who have personally done you no harm. You are in the military keeping war hawks and warmongers laughing all the way to the bank. There is no pride in being a racist cop who gets his/her jollies off on brutalizing and murdering people because their skin tone is dark.

And this brouhaha over Kaepernick and Nike is ludicrous seeing as how no one can really take the ‘high road’ because Nike’s products are made in overseas sweatshops. But then, whose fault is that? It is the fault of those who murdered the Indians and who dragged my ancestors to this shithole to serve as slaves to the most demonic, depraved, psychopaths ever to have crawled and slithered all across this planet and who are involved in doing the same exact filthy and depraved shit to this day but who absolutely foam at the mouth when called out on the atrocious shit they do. You sick and twisted deviants know what you are and so do us all a favor and drop dead!

You fucking white-assed KKKops have surely played your racist hand, this time! But believe me, we already knew how sick, twisted, depraved,  sadistic, racist, brutal and barbaric you are. So you are telling us nothing new! We already knew that your fucking twisted job was to fuck us up because when have you ever “PROTECTED AND SERVED” Black people? Not fucking ever! And we certainly don’t expect you to start now! We fucking know where we stand and that is NOT with you! Fuck you!

And though no whites are interested in what the National Black Police Association had to say, I’m posting an excerpt anyway:

It is with great dismay that we were made aware of a letter that you received from the National Association of Police Organizations (NAPO) regarding your use of Colin Kaepernick in your new “Just Do It” advertising campaign. The National Black Police Association (NBPA) is not in agreement with NAPO on this matter, and we strongly condemn their call for police officers and their families to boycott Nike and its products.

The NBPA believes that Mr. Kaepernick’s stance is in direct alignment with what law enforcement stands for—the protection of a people, their human rights, their dignity, their safety, and their rights as American citizens. NAPO has shown an adeptness at maintaining the police status quo and the tone in their letter further validates Mr. Kaepernick’s concerns, as it undermines the trust that is needed by law enforcement in order for the profession to maintain its legitimacy. That NAPO has chosen this matter to take a stance only perpetuates the narrative that police are racist, with no regard, acknowledgment, respect, or understanding of the issues and concerns of the African-American community.

But seriously Black cops, I cannot believe how you can expect something white to ‘watch your back’ when in your own letter, you are denouncing the white cops for not even acknowledging your existence or what you may have had to say before the white cops penned their letter to Nike. You even state that their letter “further validates Mr. Kaepernick’s concerns” as it relates to the facts of racism, bigotry, prejudice, hatred and brutality that is initiated against Black ‘citizens’ in AmeriKKKa by white-assed KKKops.

This bears repeating, “THAT NAPO (THE NATIONAL ASSOCIATION OF POLICE ORGANIZATIONS) HAS CHOSEN THIS MATTER TO TAKE A STANCE ONLY PERPETUATES THE NARRATIVE THAT POLICE ARE RACIST, WITH NO REGARD, ACKNOWLEDGMENT, RESPECT, OR UNDERSTANDING OF THE ISSUES AND CONCERNS OF THE AFRICAN-AMERICAN COMMUNITY.”

And there you have it, the truth at last, directly from the POLICE. The white cops don’t even respect the Black cops and so how in hell are we to expect them to respect the everyday Black person in their homes, out on the streets or at work and play? We don’t! But this is the system we are MADE to live under! So don’t even act like you don’t know why Black people are getting gunned down daily by racists in KKKop uniforms and who get off with “I feared for my fucking worthless ass life!”