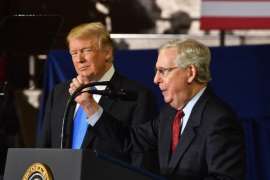 Actually by doing this, McConnell is engaging in great strategy right before the Midterm elections. You see, by calling for cuts to Social Security and Medicare, this is sure to get the baby boomers in an uproar which will likely lead them to head to the polls in record numbers to vote for Democrats, which will then give the Democrats control of the House. This will in turn aid the Republicans by the time 2020 gets here and Donald Trump is up for re-election because then McConnell and his GOP cronies and Donald Trump can say that they got not a goddamn thing accomplished because Democrats dug their heels in and refused to pass any legislation. That is excellent strategy because why else would you stand up and loudly proclaim your intent to cut Social Security and Medicare a mere two weeks before the Midterms? You wouldn’t unless you wanted the opposite party in control of the House so that then you could claim that the Democratic party was holding up Donald Trump and the GOP from making any headway in passing bills because otherwise, this would be considered, “political suicide.” And even though baby boomers are dying off, there are still enough of them left to vote and make a difference at the polls because if there is one thing baby boomers will do, and that is to vote if they believe that Social Security and Medicare is being threatened.

After instituting a $1.5 trillion tax cut and signing off on a $675 billion budget for the Department of Defense, Senate Majority Leader Mitch McConnell said Tuesday that the only way to lower the record-high federal deficit would be to cut entitlement programs like Medicare, Medicaid and Social Security.

“It’s disappointing but it’s not a Republican problem,” McConnell said of the deficit, which grew 17 percent to $779 billion in fiscal year 2018. McConnell explained to Bloomberg that “it’s a bipartisan problem: Unwillingness to address the real drivers of the debt by doing anything to adjust those programs to the demographics of America in the future.” The deficit has increased 77 percent since McConnell became majority leader in 2015.

The republicans just implemented a $1.5 trillion tax cut for the rich, increased spending on the military which already has a bloated budget and yet, Mitch McConnell is stating that Social Security and Medicare are what is needed to be cut? Talk about outrageous lies, that right there is one hellacious outrageous lie! And to make it seem even worse, Social Security and Medicare are considered ‘entitlements’. Another play on words since who could be more ‘entitled’ than members of Congress who enjoy designer health care and hundreds of thousands of dollars in the form of a salary FOR LIFE for doing fuck all? You see Mitch McConnell can destroy Social Security and Medicare because he knows that he will never NEED to make use of those programs of which millions of Americans pay into their entire working lives. So how can Social Security and Medicare be considered an ‘entitlement’ by ANY stretch of the imagination when people are paying into both programs? It cannot. But just as ‘liberal’ has been declared, a ‘dirty’ word, so has Social Security and Medicare been given designations as ‘entitlements’ to make people feel ashamed when they apply for the very programs that exist because they worked and put their hard earned money into. Republicans are shameless reptiles when they can attempt to reduce workers into shameful slogs to be used for their agenda and that agenda in this case being that they intend to cause a “Blue Wave” during the Midterms so that they can indeed, point fingers at the Democrats and call them, “OBSTRUCTIONISTS!” This same, tired old playbook never grows old. They just expect the American people to continue to be bamboozled by their shenanigans. And if we continue to fall for this GOP dog and pony show, then we are indeed, fools.

Both parties have tried their damned best to cut Social Security and Medicare for years but since the republicans are now at the helm and people are getting frustrated with “flaming orange 45’s antics,” it is time to up the ante and mix the shit up, thereby allowing for a “Blue Wave” to take the pressure off Trump and the GOP. They know their shit is raggedy and so they are attempting damage control by galvanizing the baby boomers to give seats to the Democrats. Watch what happens. If the Democrats take the House, which is why Mitch McConnell is calling for cuts to Social Security and Medicare, then the GOP is going to jump up and down in political advertisements come 2020 and exclaim that because the Democrats refused to engage in bipartisanship, nothing was accomplished and so vote a straight republican ticket in 2020. And if that happens, you can best believe that we ALL will be sitting out on the streets, dripping typhus and hookworm, which is already making the rounds in homeless encampments and in areas that are so severely poverty stricken to the point, they are likened to a third world country, which is exactly what the politicians in Washington have in store for ALL of U.S. Don’t believe it? Then bookmark this post and if this is all put in motion, try and find a Wi-Fi signal and pull this page back up in 2020 and I will make a believer out of you.

People, don’t fall for the okie doke AGAIN. Don’t play the fool for these politicians who think of you as less than bugs to be squashed on the sidewalk. They don’t care about any of us and that includes white, Black, middle class, poor, homeless; it makes no difference. Left to them, we shall ALL end up the same way; homeless, sick, broke and dead! America is being destroyed by America’s politicians. We don’t need an overfunded military because no outside force is seeking to destroy America. America is being attacked from within. It is an ‘inside job’. America’s politicians are out to feather their nests at the expense of ours. They are corporate-owned and corporate controlled. They fill you with fear about some shadowy bogeyman in Afghanistan or somewhere when in reality, those people just want Americans out of their country. We would not stand for usurpers from another country to come here and take over and so why should they? Those people had nothing to do with your 9/11. Fear mongering is a strategy both political parties have engaged in because it works. They control us by telling us who our enemy is when we have no greater enemy than worthless, corrupt, criminal politicians and that is why they are busy pointing the finger at others, to get the focus off what they are doing to us all. This November, tell them to shove it up their ass! You are not falling for their lies and that Social Security and Medicare are not the problem, are not the reason there is a huge budget deficit and that no, those programs are not ‘entitlements’. They are there for you because you paid for them. Those ‘entitled’ asses in congress need to get voted the fuck out. Those are the ‘entitled’ assholes! Why do you  think they are called, “career politicians?” There should be no such thing since ‘term limits’ should apply to ALL members of Congress. Wake up and vote that shit out!