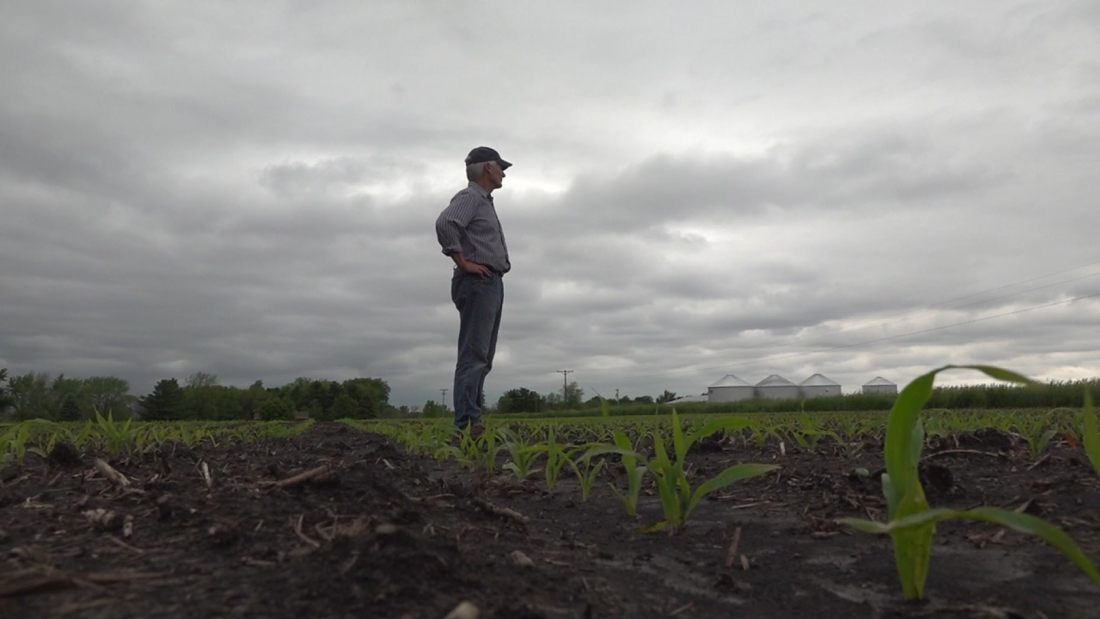 The headlines out today do not bode well for mass food production thanks to climate change or global warming or whatever you want to call it, which was brought to us via the whites, who also came up with the not so bright idea of mass food production seeing as how food recalls are in the news daily. The headlines are about farmers who are impotent as a direct result of climate change since the recent historic flooding events in the Midwest has ground planting to a halt, as well as the delivery of products via the Mississippi River.

The Mississippi River is the key shipping artery for agriculture, inputs to manufacturing, chemicals, energy products, construction and building materials that are used domestically and for export to the world market through the Gulf of Mexico.

But there’s not much water traffic this spring season due to historic flooding from snow melt and rain in America’s heartland. Record-breaking rainfall has caused flooding along the Mississippi River and as a result, the river is basically closed for business.

So thanks to Mother Nature fucking white folks shit up since they are no damn good anyway, food prices are soaring and that is a good thing since this should drive many folks to go back to planting community gardens and fending for themselves. We were much healthier when we grew our own food because what happened when food became mass produced? GMO shit! Roundup, which contains a known carcinogen, is sprayed every damn where to stop a goddamn weed from growing when in my childhood, we merely bent our backs over the fields of vegetables and pulled the weeds up by the root, weekly and we didn’t suffer for it. We received much needed Vitamin D from the sun while getting great exercise and healthy foods. Mass food production destroyed all of that. And now look at us; morbidly obese couch potatoes who stare down at a damn phone while munching down on garbage passing for food that was delivered by Uber. Seriously???!!!

But since we don’t have the sense god gave a goat, Mother Nature to the rescue AGAIN!!! I hope Mother Nature continues to, essentially, ground capitalism to a halt and MAKE people get up off their obese ass and plant their own vegetables. Look up from those goddamn phones and realize what is truly important and newsflash! What’s NOT important is all your fucking Apps on that goddamn smartphone that’s taken the place of your damn brain. And so since farmers are “in limbo,” they are going to stay in limbo because climate change ain’t going nowhere. So that means, either get up off your big ass and plant your own vegetables or head to the store with your $25 in food stamps since the Trump Administration has cut the hell out of food stamp benefits and then dig deep inside your pockets or purses and get to shoveling money across the counter to pay for the massive increase in prices for garbage that shouldn’t even be served to a cockroach, Trump supporters since many of you are still devoted to that lump of orange clay that’s not giving a damn about your plight.

You can sit somewhere on your stupid ass and pretend that this is all just going to right itself and things will be back to normal in no time flat all you want, but the writing is on the wall for all to see; climate change is here to stay and things are only going to get worse from here. Don’t believe it? Here is some more bad news for those of you who are not into farming for yourselves or doing much of anything else for yourselves, for that matter.

The Hurricane Season Prediction for 2019 Is Similar to Last Year. That’s Bad News

The National Oceanic and Atmospheric Administration (NOAA) is predicting a “near-normal” hurricane season in 2019, with between two and four major hurricanes expected. However, only two major hurricanes hit in 2018, but both made direct strikes on the United States, causing billions of dollars in damage and claiming dozens of lives.

Gerry Bell, NOAA’s Climate Prediction Center lead hurricane forecaster, emphasized Thursday that communities should take the hurricane season seriously because, as 2018 showed, even an average number of storms can cause significant damage.

So don’t even think about ignoring the truth in that climate change is here to stay since all you need do is go to Panama City Beach, Florida or Mexico Beach, Florida which was reduced to rubble to see for yourself. And those who still ‘live’ in Panama City Beach are to this very day, in tents waiting on funds from the Trump Administration. The mayor of Panama City Beach, Florida has stated that he has been to Washington three times to beg for more funding to clean up the debris left behind by last year’s hurricanes and he says that all he got for his efforts was the sound of crickets chirping. Meanwhile, people are sitting all up in tents provided to them by a more fortunate resident of Panama Beach, Florida and the pictures included in this blog are mostly from her ‘tent city’. The people who ‘camp’ there all say that they would not have any place to go if this woman had not opened her backyard up to them and equipped it with shower facilities, electricity and the other necessities of life. This is exactly what I mean, Black folks, in that we need to get back to community involvement which means doing exactly what this white is doing for other whites. In the pictures, you will notice that not one Black person is depicted. Even disasters cannot bridge the divide between Black people and whites.

The vast majority of homes that are occupied by Black people are owned by whites and those include apartment buildings and so what do we really have to lose when it comes to seeing whites’ shit get fucked up? That’s their shit and nine times out of ten, the house or apartment is a slum and so while we are trying to get our act together and go back to the basics, the same applies with housing other Black people in your area; helping them find suitable housing. Collaboration is the key. Keeping the lines of communication open is the key. Realizing that we are all we have is the key. What is happening is real. What is happening is fucked up but it had to happen because there was no other way to turn the tide. This is Mother Nature’s way of saying to the whites, “You ain’t ALL that! I CAN and WILL fuck YOU and YOUR shit up! And don’t even think I’m playing with your debased ass!” Mother Nature is insisting on grinding the whites’ capitalism shit to a halt! She is fed up with those parasites fucking up her planet and she is doing something about it. Expect more and worse shit to come. And so the only thing I can do is attempt to get you to prepare for what is to come.

Hurricane season is here now. So enjoy the pictures by Vice News that showcase the fact that those who were impacted by last years hurricanes are still adversely impacted today despite having screeched and wailed to their ‘white god’ Donald Trump that they need some funds. They are being referred to as “The Forgotten People” and there will be many more ‘forgotten people’ joining them. So don’t say that you weren’t warned because that would be a lie!

With historic flooding in the Midwest and hurricane season upon us, it’s about to get even uglier than this and so just like those who are Trump’s rabid base in the Florida Panhandle are being ignored by their ‘white god’, Donald Trump, so are the farmers in the Midwest and Trump’s other supporters who applaud his racist rhetoric, bigotry, misogyny and stupidity. You reap what you sow and so getta reaping!

2 thoughts on “Thanks To ‘Whites’ Bringing Us Climate Change, Black Folks, It Is Time To Get Back To A Sense Of Community”