The scenes out of flood ravaged Amerikkka and the hand wringing ALL across Amerikkka these days has me literally rolling across the floor laughing and some more shit! Take a look at the new adventures in snorkeling.

There ain’t a goddamn thing horrible about that! Those people have THE best setup. How many of us can just put on snorkeling gear and dive in our basement as fish float around us even if we cannot really see them that well since the water is all brown? I suggest using a really high beam light to see the wonders of the rivers as you enjoy your snorkeling adventure right inside your homes. I mean, they do tell us to make the best of  ‘any’ situation and so, snorkeling would be a wonderful way to spend the day with family and friends especially seeing as there is no electricity since the outlets are all flooded.

Why spend so much time packing for a trip to the Bahamas or to Jamaica when you can experience much of what you intend on experiencing in those places, right at home? No need to pack a bunch of bikinis and swim trunks, flip flops and other beach attire. You don’t need to purchase a plane ticket or worry about airport shuttles and Customs officials, passports and crowded beaches. No one is going to ‘crowd’ you out in your own basement. That’s the joy of having lakefront property. If ever the lake overflows and decides that it wants to take up residence in your basement, you know how like the whites decided to ‘gentrify’ areas and take them over that were originally inhabited by Black people, why all you need do is grab your bikini, your snorkeling gear and get to enjoying you a nice dive.

No need to get to sniffling about the situation like this dude did.

In North Little Rock, which sits across the river from the capital city, officials went door-to-door Saturday to urge residents in about 150 homes near the river to consider leaving.

“We’ve lived here for 12 years. Never been like this,” said Larry Campbell as he packed up his belongings of his North Little Rock home into the back of a truck, according to KTHT-TV in Little Rock. “It’s tough. It’s really tough.”

“You have to just make a decision because you’re going to lose everything,” Campbell said as he choked back tears.

In Missouri, the swollen Missouri and Mississippi Rivers forced hundreds of roads to close and inundated homes and businesses.

In St. Louis, several hotels crowded with visitors for the Stanley Cup Final and Cardinals-Cubs baseball games were left without hot water Sunday after too much water overwhelmed a pump station. 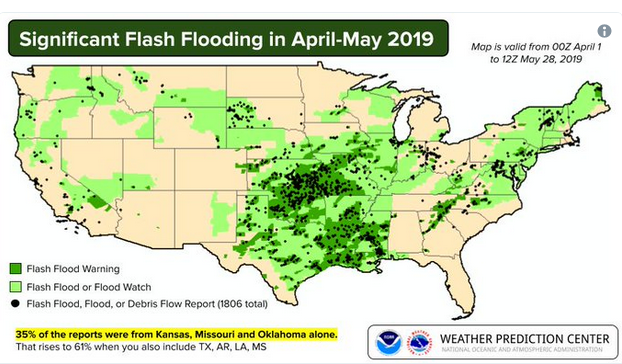 And once again, thanks to Trump’s campaign slogan, “Make AmeriKKKa Great Again!” Amerikkka is looking SO great when it comes to flash floods, flash flood warnings and watches ALL across this SO great looking AmeriKKKA!

To those of you around the world who read this blog, pretty soon now, you won’t have to worry about this sorry ass shithole fucking with you because it’ll be underwater. We shall ALL have drowned and even though congress has just passed a Disaster Relief Bill, you can bet your sweet ass that it is too little, too late! This Titanic is sinking like a stone. When whites start “choking back tears” because they have to throw a few items of ‘value’ in the back of a truck, shit ain’t so ‘great’. When whites can go snorkeling in the basement of their homes, shit ain’t so ‘great’. When whites lakefront homes are now “In The Lake Homes,” shit ain’t so ‘great’. These motherfuckers are over here wailing, moaning and screeching to ALL and sundry! This shit ain’t supposed  to happen to them. This shit is for everyone else to deal with because whites were supposed to have seen to it that only the Maoris of New Zealand got fucked up, that the Aborigines of Australia got fucked up, that the Indians, indigenous to this fucked up country they named AmeriKKKa would get fucked up, that the Polynesian people would get fucked up and they did, by the whites. But you see, the whites never imagined in their wildest dreams that they were just too dumb to see that what they had put into play, the world over, would eventually get around to fucking up their skank asses!

You see, that shit was not supposed to happen because where the fuck are they going to go? Back to the moon? The never went there in the first goddamn place. To Mars? Fuck if your white ass is going to make it to Mars or any damn where else to turn it into the cesspool you’ve turned this planet into what with your toxic EVERY goddamn thing from food  to weed killer to atomic weapons to medicine and your so-called technological advances. Where the fuck have they gotten you? Whatever the whites produce is going to be destroyed, in fact, it IS being destroyed and they ain’t hardly happy about that. But I am, hence the title of this blog! I am loving it!

It is quite apparent that the whites attempts at keeping Mother Nature ‘in check’ is NOT working! And another round goes to Mother Nature! LMAO!!!!!!! Arkansas, you got a breach!!! HAHAHAHAHA!! I had swore off champagne, but this is totally ‘toast’ worthy, especially when whites are “choking back tears” as they fill their pickup trucks with their precious possessions that mean more to them than life itself! Pack motherfuckers! Pack! “Where you gonna go when the river comes for you?” Mother Nature wants to gentrify the whites shit in order to bring in water. LMAO!!!! Damn! I cannot wait until the hurricanes hit! I gotta stop because I’ve got just too many tears of laughter in my eyes! What comes around, goes around!! Now get ta steppin’!