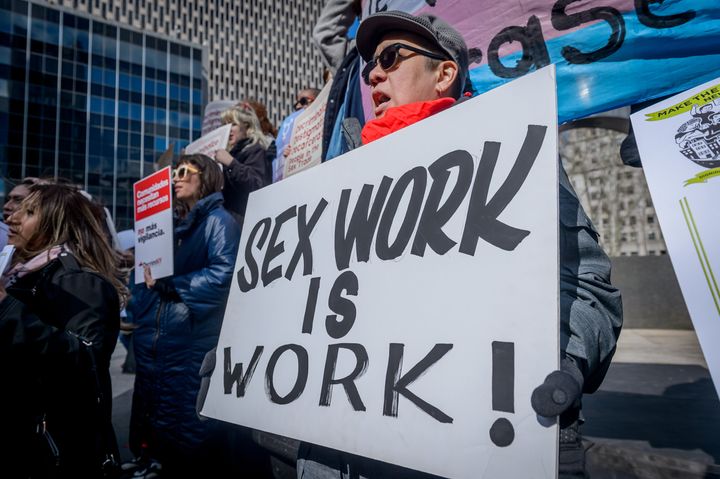 Lawmakers in New York introduced a first-of-its-kind bill to decriminalize sex work throughout the state on Monday. The Stop Violence in the Sex Trades Act is a legislative package that “decriminalizes and decarcerates” the sex trade in New York, according to a press release from organizers at the Decrim NY coalition. If passed, it would […]

Below is a comment I posted on this blog.

“Sex work is work and should not be criminalized by the state,”

Well, it’s not work I’d want to be doing. But anyway, what about Nevada? Aren’t there already areas in Nevada whereas prostitution is legal seeing as how there are whorehouses there? In fact, the guy(Dennis Hof) that owned some of those whorehouses ran for public office but dropped dead before the election and yet still managed to win. I guess he is representing his constituents from the grave? Hey! I’m not knocking it since all politicians may as well ‘govern’ from the grave since they basically act dead by getting not a damn thing done, year after year after year.

Below is the response I received.

Good point about Nevada, Shelby. It’s also legal in several European countries – and here in New Zealand. We have 2 brothels here in New Plymouth (that’s how they’re listed in the Yellow Pages). Benefits are very low here and with the scarcity of living wage jobs for females, sometimes it’s the only way women can make sure their kids get breakfast and lunch and have shoes to wear to school (there’s still far too many who go shoeless).

Now, my response to that.

“Dr. Bramhall, I have had nothing in the fridge and even less in the freezer and still, turning to prostitution never entered my mind. My body is just too precious to me to risk getting multiple STDs by having multiple sex partners when we know that condoms are not absolutely foolproof. Who is going to take care of those children when the prostitute mother is dead from AIDS? There is no excuse for prostituting oneself. That is a cop-out if ever I’ve heard one.”

I do understand that many people believe that prostitution should be legal since it has been proclaimed as “the oldest profession in the world,” but be that as it may, with what is going down today, what with the ‘incurable clap’, AIDS, herpes, genital warts and the list is endless, continuing to justify prostitution and ALL things of a sexual nature as being fine and dandy is, in my opinion, not the best way to go about empowering people.

Is anybody aware of the statistics of sex workers who are filled with STDs? My cousin went to a doctor’s office in Baltimore, MD and he told me that there was a bulletin board up with multiple vaginas on it, all from Black females, and the vaginas were loaded down with the most horrible stuff he’d ever seen. It was meant to encourage people to take their health seriously and to understand that there are plenty of gross and nasty disease riddled people out there who are just spreading diseases around. I asked him if there was a bulletin board set up showcasing what infected dicks looked like and he said “No.” The concentration seems to be on what the woman’s infected vaginas look like so that men, if they see that nasty looking shit, should steer clear of it.

I would rather starve to death than take up prostitution and believe me, I have starved. Poverty is damn near every American descendant of slaves, birthright. If no one on this planet knows poverty, we do. And when my apartment burned to the ground, I was homeless and walked by two men after having left my burned out shell of an apartment with the few items I could find that hadn’t been burned beyond hope and both looked at me and one said, “I know you’ve got nothing since you’ve just been burned out. How about coming upstairs with us and make a little money?” Their fucking ears are still ringing and that was so long ago, it ain’t even fucking funny! I cussed their damn asses out SO goddamn bad, I blushed! But NEVER did I EVER think so little of myself as to lie back and have some sort of ‘sex’ with strange assholes for something to eat. I’d take myself to a soup kitchen first.

And AGAIN, to state that prostituting oneself is okay if you need to put food on the table for your kids is just what I’ve stated, a cop-out because who is going to put food on the table for the kids when the mother is in the hospital, breathing her last because of complications from AIDS? This shit out there is killing people and to encourage prostitution in this day and age is to give someone a death sentence. This shit ain’t fucking playing with our asses! Who in hell wants to walk around with jelly bumps on their private parts? Who wants cauliflower type shit on their private parts? And if you said, “Yes!” Really?

When I lived in Minnesota, in the public library, I overheard a conversation whereas this woman was telling a man that she HAD genital warts but that she was cured. I’m saying to myself, “Bitch, please! You still got genital warts. There ain’t no cure for THAT shit!” People are seriously deluding themselves if they think that the shit they pick up can be cured with a shot of penicillin.

What I don’t understand is why are we hell bent on making every sex act including sodomy; legitimate, lawful, legal and some more shit? What the fuck is wrong with us? No one has any morals, decency, principles or values any more. That is quite obvious. More’s the goddamn pity!

But hey! If you want to go out there and put your health at risk as a way to feed your kids, go right ahead. If you want to risk your health and that of your unborn child, go right ahead because babies have been born with diseases because the mother received no prenatal care and the baby was born, fucked up. Go ahead and make every excuse in the book as to why prostitution should be legalized on a nationwide level. We are already about to legalize weed on a national level and so we can all just cough our lungs out while burning something awful in our private parts and die happily ever after. Sound good? Of course it does because that is what everyone besides me wants!