For those of you who have posted blogs and I have not gotten a chance to view, it is because I have been on yet another trip to Baltimore and the crazy shit that’s happening just won’t quit!

My cousin and I go to Baltimore for our primary care because we live in racist ass Lynchburg. We are about to bounce in September and believe me, we cannot wait. However, with that being said, the crazy shit that I have seen in Baltimore, MD THIS trip is just whacked! We had to go to the airport to get our tickets and the lightrail was out-of-service thanks to a massive sinkhole on Pratt Street in downtown Baltimore that put the lightrail out-of-service. Thankfully, we found a way around that small problem.

At my cousin’s doctor appointment, there were people sitting in the waiting area who were homeless and who had been homeless for quite some time. The problem is that there was a social worker at the clinic as well as a ‘Housing Co-ordinator’ and both were completely useless and were paid to basically do nothing. One lady was asking the ‘housing co-ordinator’ to help her find housing and what she got for her efforts was a listing straight from ‘Apartmentsdotcom’ and told to “find your own housing because there is no affordable housing in Baltimore, MD.” What the fuck? The social worker was who had referred her to this so-called ‘housing co-ordinator’.

As we were leaving my cousin’s doctor’s appointment, we stumbled upon a man who was sleeping on the sidewalk in 105°F. I have no idea if the man was alive or dead, but we were too afraid to touch him for fear that he was ice cold. 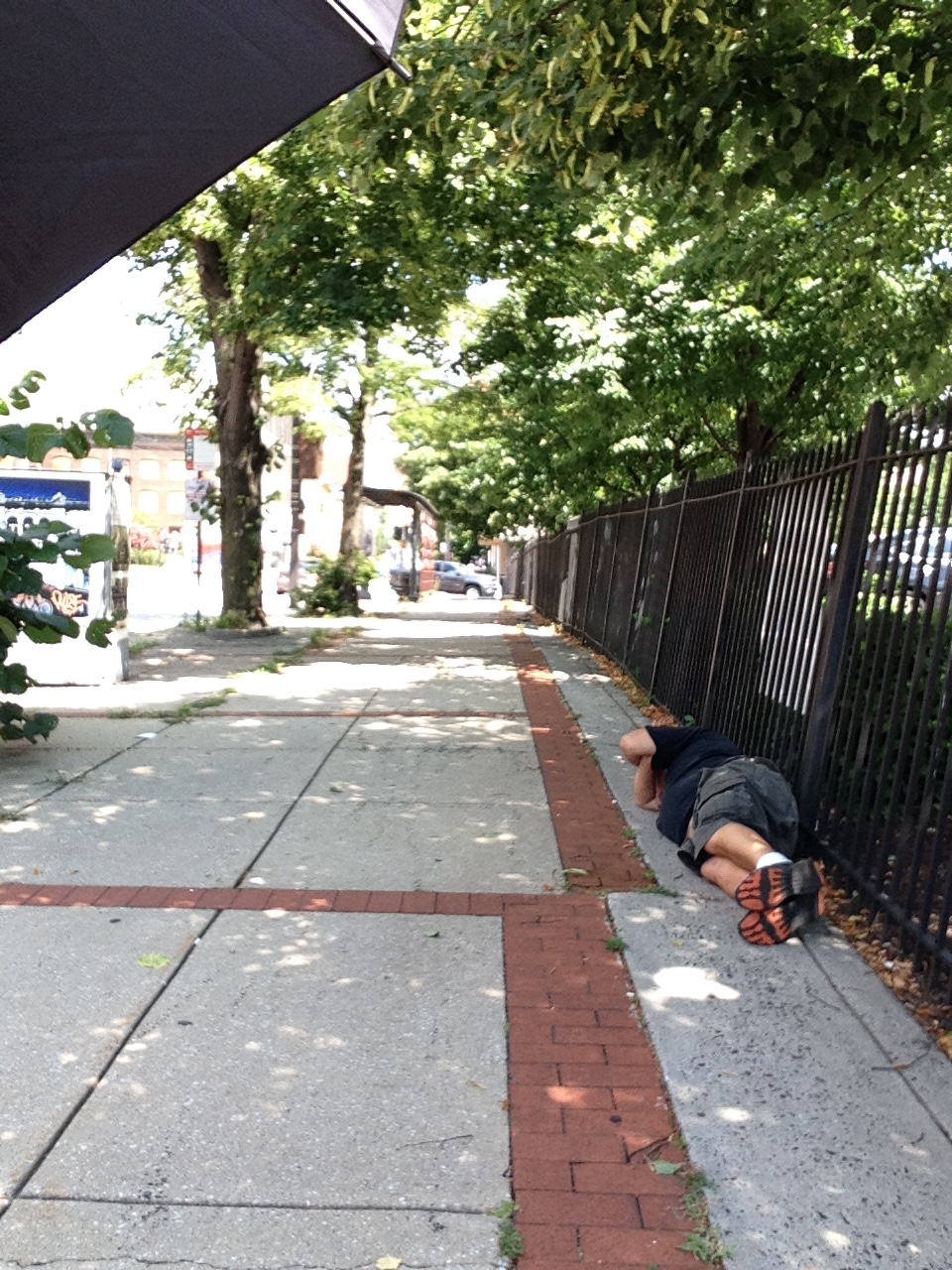 After passing this man, we damn near stumbled upon another scene just like this one, only there were several people standing around a man who was lying on the sidewalk and it appears that he had fallen and a lady knelt beside him and tried to feel for a pulse only to look up and state that she couldn’t find one. We left as she was calling for paramedics. This scene plays out all across America, every single day and it is getting worse.

As politicians fight amongst themselves over Mueller investigations and Russian interference in elections, the people of this country are fucked up and are dropping dead on these mean streets and no one gives a goddamn! As solar panels are put up to provide lighting for specific areas, people are left to make it or not on their own. 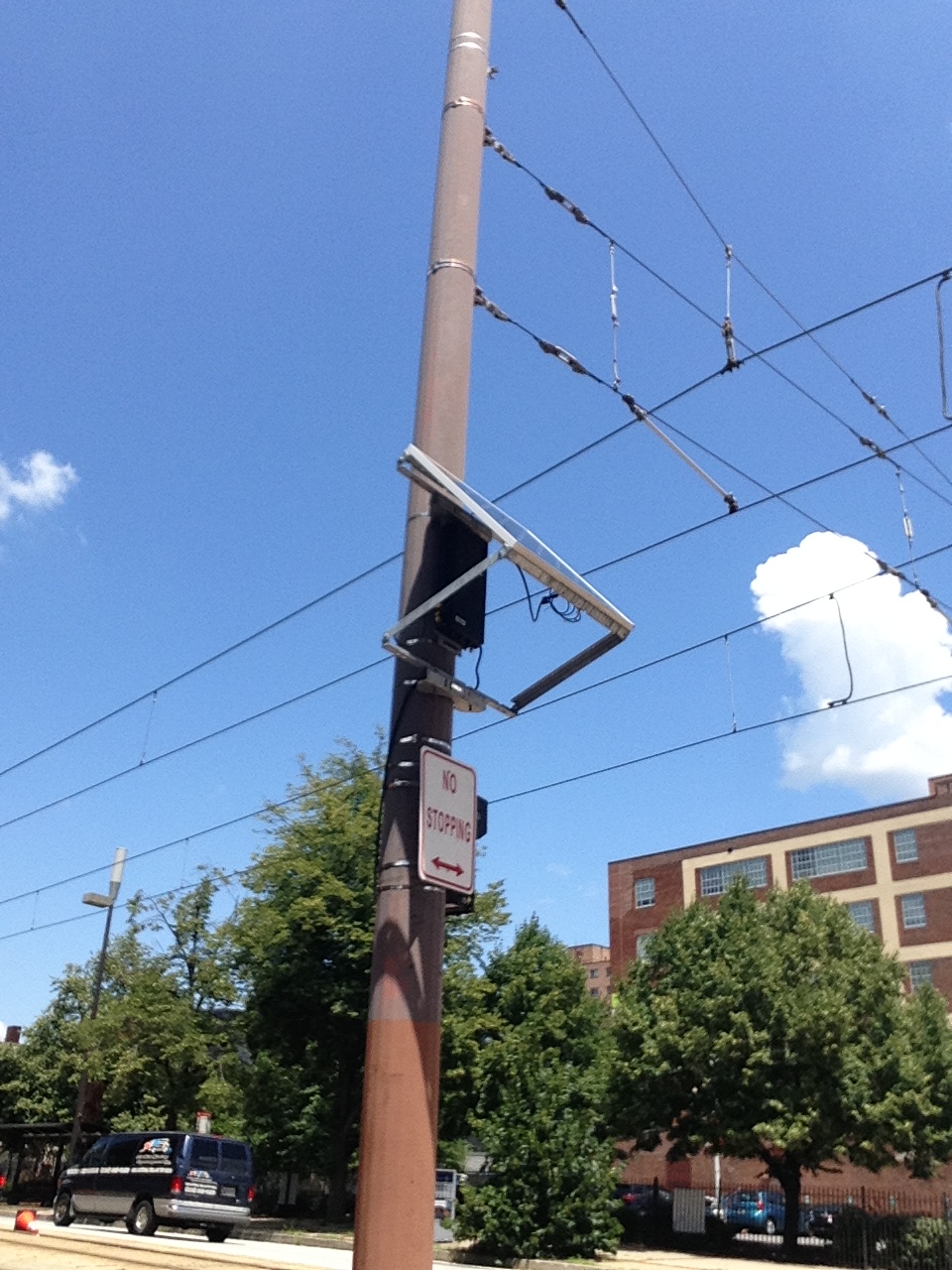 What is the point to all of this when people need the money that was put to use to provide solar lighting in some areas? Why is there never any money to help those in need? How can people lying on the sidewalk be so overlooked while light fixtures are deemed more important than people dying on the sidewalk due to the heat or health conditions or both? What the hell is wrong with us? Why do we not see ourselves when we look at homeless people because with the shit that is going down, how can we not see that where they are, we too shall go? Not one of us will be immune to the crazy shit that’s happening. Not one! Don’t believe for a second that just because you believe that your job is secure in that no robot can do what you do, you are completely in denial. Robots are performing surgery. Robots are building vehicles. Robots are performing tasks that humans do including acting as sex dolls. Before too long, there is not going to be any job left that a robot cannot do and so more and more of us are going to join the ranks of the homeless; dying because we are homeless.

You sit in your comfortable home now, but the day is coming when your comfortable home will be exchanged for a sidewalk, an underpass, a tent or a box. Someone maybe checking for a pulse on your body and calling for the paramedics that will also be robots to come haul you to the morgue. The time to do something about this is now! And this is why I have collaborated with a company and designed a logo to help end homelessness, one person at a time. Someone has got to do something and I can no longer sit somewhere and wait for the next person to get it done.

I will soon have up and running a site whereas I will be selling t-shirts and mugs, caps and other items for the express purpose of starting an organization to end homelessness or at the very least, put a dent in the overwhelming numbers of homeless persons. No one is really doing a damn thing about homelessness besides posting videos after having interviewed the homeless. What the hell does that do? Not a goddamn thing. I am hell bent on trying to be a solution as opposed to continue as a frustrated onlooker. Below is a picture of just some of the merchandise that I will be selling with the proceeds going exclusively to helping people step from homelessness into housing.

The writing is on the wall. There is no affordable housing. Rents are skyrocketing. Home ownership is out-of-reach for millions. The only way that we can attempt to help one another is through community support which means helping when we can; finding ways to counter the escalating shit that’s been coming down the pike for some time now. We can no longer look the other way because the crazy shit that is happening is going to affect us all. Apathy and complacency can no longer be the rule of the day. People, wake the fuck up! No politician is going to do a damn thing about a damn thing. All they are doing is trying to distract us from the real shit that is going down. Donald Trump’s tax return release is not going to house a homeless person. Russia’s supposed meddling in the election is not going to house a homeless person. That stupid Mueller hearing is not going to house a homeless person. That shit is just smoke and mirrors; the exact same shit that IS Wall Street. Wall Street’s shenanigans are just that and they have no place in our everyday life. Those of us who are on the mean streets of this shithole have nothing to lose or gain from Wall Street. We are not high rollers. We are not playing with fake ass money that is produced by a magician’s sleight of hand. I am seeing real people in real need; something that the politicians never care to see or concern themselves with. They don’t care that millions of people are housing insecure, are food insecure, are without health care because if they did, do you really think that the only worthless shit that they are concentrating on is Trump’s tax returns, Russia’s supposed meddling and other frivolous shit that matters not to the man, woman or child who is lying on the sidewalk breathing their last? What I just witnessed, a man without a pulse lying on the sidewalk in broad daylight with temperatures soaring to 100F should not have happened in one of the supposed richest countries on the planet, but I witnessed it.

I can no longer pen poems and consider that that is all that I should do. Who is that helping? I cannot just continue to witness the horror of people dying on the sidewalk because they cannot get in out of the heat; the heat that is only going to get worse thanks to man-made global warming. You do what you want or not, that depends on you. But I have got to at the very least….try! And that is exactly what I intend to do!

While politicians drone on about impeachment,
I lie here able to sleep on hot ass pavement.
While another dog and pony show commences,
and Mueller testifies about Trump’s offenses,
just down the street from me, a homeless man lay dying.
but over his death, I don’t have any tears for crying.
For I am probably next and there will be none to weep,
since the other homeless souls all around me are asleep.