Thankfully, sometimes when racist shits decided to publicly decry their racism, there are consequences. I already blogged about the fact that several Black employees at Liberty University resigned, including the Director of Diversity, but now a star basketball player has had enough of Falwell’s racism.

Two weeks ago LU president Jerry Falwell Jr. tweeted a picture of a face mask with a photo of someone in blackface and a person in KKK robes superimposed on it.

Dozens of Black LU alum have called on Falwell to resign, and at least four staff members have left the college.

Thankfully, another Black woman refuses to continue to put up with racism aimed at us by the whites while we make those shameless shits look good for their universities, businesses and bottom lines. Enough is enough! If these shameless racist shits refuse to respect us, then don’t continue to do business with them or make yourselves useful to them in ANY WAY AT.ALL.

Asia Todd will have no problem transferring to a university that may treat her as a human being because Falwell most definitely does NOT think of American descendants of slavery as human. We are just a means to an end. But that bastard is even worse than his daddy.

At one point in time, here in Lynchburg, Black people could not even attend Thomas Road Baptist Church, a church that was founded by Jerry Falwell SR., this racist piece of shit’s daddy. It was only after Black people started making a little money is when Jerry Falwell Sr. started sending buses around into Black neighborhoods to try and get Black people to attend his church filled with racists. Black people, at the time, refused to join in with that bullshit! Black people had their own churches to go to. We didn’t need to sit up in churches owned and operated by racist whites. And never forget, the Falwells obtained their money through running illegal liquor during prohibition. They’ve got plenty of filthy shit attached to their racist asses and everyone should know that Falwell Sr. was against gays so damn bad, that the gays in Lynchburg had to go to Roanoke to ‘come out’, and now his son is a stomp down flaming gay motherfucker who has threesomes with the ‘pool boy’ and his piece of shit wife who is even worse than Falwell is. That wife of this son-of-a-bitch ain’t no joke! She runs Falwell’s racist ass and she is so racist, she makes him look like a cartoon character next to her stomp down, flaming racist ass. That bitch is the devil’s own wife!

The bullshit going on down here in this racist burg has been kept on the down low too goddamn long and the stench is now starting to smell. That’s what happens when you lift the lid off of shit; dirty, funky, racist shit STINKS! And that is all that is crawling around down here in this racist shithole run by stomp down, flaming racists; to the last white piece of racist shit! These fuckers already know, don’t even fucking start with me. They can handle these namby pamby Black folks down here, but I ain’t them, goddamn it! I’m not walking around with their fucking BUYBULL in my hands hollering about some damn scripture the fucking racist whites don’t even believe in. Most of these Black folks here have been trained well by you worthless, pieces of racist shit, but don’t get the shit twisted because again, I ain’t them, motherfuckers! I’ll put your shit on the map for ALL the ‘racist’ reasons, you hypocritical, fake ass christian, filthy, racist shits!

I hope the fallout from this shit continues. Those Falwells need to be stopped in their goddamn tracks because they are making life a living hell for Black people in this racist hell hole and that is a goddamn fact!

If Falwell wants to walk around with this shit on, fine, but there should be consequences and I am glad that Black people are finally waking the fuck up and are refusing to take this shit lying down.

Falwell’s tweet included a picture of a face mask with the photo of the Klansman and person in blackface superimposed on it. 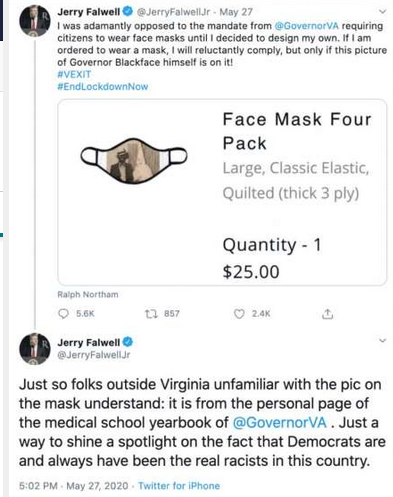 And I am pretty sure that there are plenty in attendance at Falwell’s church that’s already placed an order for this racist shit! I know the owner of Fifth and Federal restaurant placed his order for his employees. These shits are shamelessly unapologetic in their racism. So yeah, you piece of shit, get ready to see only other racist like minded shits sitting up in your restaurant. The only problem is that the shit ain’t gonna close because there are too many goddamn flaming racists in this fucking burg.

But as usual, I digress.

On June 1, an open letter from 35 Black LU alumni said Falwell’s tweet made light “of our nation’s painful history of slavery and racism.”

The signatories called on Falwell to step down as president.

Falwell did not even acknowledge the letter from the Black LU alumni, it was only after donors stated that they would no longer donate money to Liberty University and started distancing themselves from this racist’s university that prompted Falwell to offer up a lame ass apology. Falwell could care less if there were no Black employees at LU. Hell! Enrollment of Black students has fallen off to damn near zero.

At least four black faculty and staff members have resigned since Falwell’s tweet was sent, Inside Higher Ed reported. One of the most notable was Quan McLaurin, the school’s director of diversity retention.

Now, are you starting to get a ‘picture’ of what life is like not only at Liberty University but for ALL Black people in Lynchburg since the Falwells run this godforsaken burg.

We’ve got a piece of shit Black female mayor, Treney Tweedy, who pleaded with Jerry Falwell Jr., to not reopen Liberty University when COVID-19 was closing all universities in Virginia. Falwell told her to piss off and that is exactly what she did. The Black mayor is just as terrified of Falwell as the majority of Blacks are in this burg. Falwell encouraged ALL students to return despite the governor’s lockdown rules prohibiting the reopening of universities and that in turn brought COVID-19 to Lynchburg. This piece of shit, Jerry Falwell Jr., truly believes that he is ‘god’. Those stupid shits over at Liberty University and at that church that his brother, Jonathan oversees, are probably all bowing their heads and worshiping Jerry Falwell Jr.

“So to the Falwells and to the rest of the racist whites in Lynchburg, you know now that I will put your racist shit out there, so keep doing the shit and I have no problem exposing it. I was born here and so I know the foul ass, vicious shit behind your racist asses that you think is a secret. You know I don’t give a shit about ANY of you because I’ve come up against most of you and you ain’t hardly had a great time afterwards. Yeah! Keep trying me because I’ve got plenty where this came from and what’s more, you know it! Fuck you lousy motherfuckers and you know I sincerely MEAN THAT! Try me!”