Okay, I give! I just fucking give! Now, I can honestly say that I have seen it all!!!!! 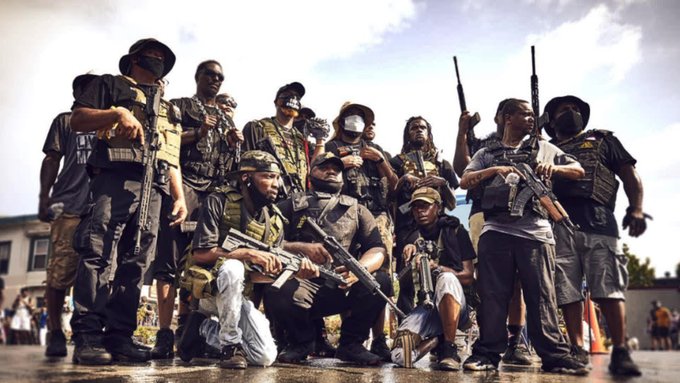 Minneapolis is commending the Minnesota Freedom Fighters, who are Black men with AR-15s and Glocks and wearing tactical vests and bandannas who provided extra community security in the wake of protests after the death of George Floyd, according to reports.

What.The.Fuck. But get a load of THIS!

He’s grateful he found other men — about two dozen black men — to man up with him and be of service.

“This is about us taking a stance to patrol and protect our community. This is something that was asked of us during a time of unrest, and we saw that there was a need,” Jackson added. “That sparked some purpose in some of these men’s lives to understand that their value was not just in protecting buildings that don’t belong to us.

Did you read that? Those stupid, black shits are protecting shit that don’t even belong to Black people. That shit belonged to their mortal enemy; the whites and the IMMIGRANTS they dragged over here. I just cannot make this shit up!

Black women, are you taking note of this shit! Those black bastards leave you to hang out to dry while their asses are busy protecting some burned out shit that belonged to IMMIGRANTS! Black people don’t own shit in Minneapolis, MN and that is a goddamn fact and if you don’t believe it, then re-read the blog I posted that showcases that fucking fact! And here are a few excerpts from THAT blog!

What ‘Minority-Owned’ Businesses? ‘Immigrant’-Owned Businesses Are Suffering In Minneapolis, Minnesota. Don’t Get The Shit Twisted!

“It’s been agony,” says Mohamed Ali, a native of Somalia

“All these businesses are still boarded, and it’s over a month later,” Mr. Ali said, gesturing in every direction of his Minneapolis neighborhood. ”This was a thriving area,” he said. “Now a lot of minority businesses are burned.”

Long Her, a Laotian immigrant, has operated a clothing store in St. Paul since 1991. When he surveyed his losses after the riots, he openly wept: 550 suits, 249 pairs of pants, 227 dress shirts and 180 pairs of shoes, as well as his cash register, other electronics and damage to windows and the front door. Many of his most valuable possessions, kept in a heavy-duty safe, were stolen, along with his U.S. citizenship papers.

Where are the police?’

Bao Huang, owner of Hop Wong near the corner of Lake and Chicago, slept in the Chinese takeout restaurant with a gun through the four nights of riots, but he couldn’t prevent a fire next door from damaging it. “Where’s the police? Where’s the city? Every year I pay taxes. Where are the police?” Huang said.

Hundreds of business and property owners, many of them immigrants, remain angry the city and state did not protect them.

Someone set a fire that consumed Gandhi Mahal.The next morning, [the owner] Ruhel Islam’s response went viral: “Let my building burn,” he said. “Justice needs to be served.”

Islam was a student demonstrator in Bangladesh in 1990 when a mass uprising toppled a military ruler.

Across the street from Gandhi Mahal, the bathroom in the Wilson Law Group building became the “port-a-potty” of the riot, said David Wilson, who owns the building. As an immigration lawyer, Wilson battles the U.S. government in courtrooms and said he knows how “rights can slide off the table quickly.”

Now, you tell me, where are the ADOS people who are moaning and wailing over their shit getting burned to the ground??? Where???!!! And yet those dumb ass black, wimp assed pieces of black, stupid shits are standing somewhere with guns, protecting the burned down shit of IMMIGRANTS while homeless Black youth are being sexually assaulted in parks.

MINNEAPOLIS (AP) – A juvenile has been sexually assaulted at a Minneapolis homeless encampment. Tents started appearing in the park earlier this month. Some people started migrating to the park after they were evicted from a makeshift shelter inside a Minneapolis hotel several blocks away. At least 200 tents were recently pitched there.

The majority of the ADOS population in Minneapolis, MN is homeless on any given night because the affordable housing units have almost ALL gone to housing IMMIGRANTS, especially those from Somalia. Why aren’t those Black motherfuckers strutting through the streets protesting the foulness of THAT shit? Why are they not strutting through the streets with a show of arms because they are mad as hell that thousands of people who look like them are living in third world conditions with typhus and hookworm dripping out their ass? Why aren’t those black assed motherfuckers screeching about health care for ADOS since Somalis have been given the funding by whites to establish their own medical systems and facilities that cater to their needs and ONLY to their needs and yet Black people make up the majority of the uninsured in Minneapolis? Why aren’t those black assed pieces of shit screeching and wailing while strutting through the streets of Minneapolis with their guns about the fact that Black child poverty and hunger and homeless figures are out of the ballpark?

But yet, they want the whites to understand that they are WITH them and the IMMIGRANTS because just look at them. That is slave mentality at its finest! They are out on the streets, making damn sure that some fucking IMMIGRANT owned burned down businesses are protected. Protected from what? What’s left to protect? They’re a bit late to the party, but there they are, just a showing off that they can strut through the streets showing other Black people that they don’t give a damn about them. They only give a damn about whites and IMMIGRANTS! Yeah! That’s the black ‘man’ of today; a punk ass bitch! And that lame ass shit, we don’t need!

Where were they and their damn guns when Derek Chauvin was choking the life out of George Floyd with his knee? Where were they when the kops were murdering Jamar Clark? Where were they when the kops were murdering Philando Castile? But they want the whites and the IMMIGRANTS to know that they are there for THEM! Fuck ADOS! Fuck Black women and their children who are homeless thanks to the fact that the whites along with those whom the whites welcomed over here; the fucking IMMIGRANTS are all doing just fine and now, they’ve got even more help in the form of some Black assed, punk ass bitches that call themselves, “Black ‘men.” You useless pieces of shit should just do us all a goddamn favor and drop dead because you are indeed, damned useless.

Black people are fucked up in Minneapolis, MN and I should know because I lived there and I saw the shit, first hand and I’ve reported on that shit all over this blog. And yet some punk ass black bitch motherfuckers are strutting through the streets trying to be seen and patted on their damn stupid ass heads by the whites. They are nothing but a bunch of massa’s house slaves. Those motherfuckers would be the very ones to tell on other Black slaves if they were planning an insurrection. We don’t need that type of shit in our corner and so take a good long look at your enemy and he is the same color as you and your children Black women! Black men have lost their damn minds! For the love of !!!!!!!

I am done! Stick a goddamn fork in me, I am SO damn done, I look like a California wildfire got to my ass!

14 thoughts on “Punk Ass Black Men With Guns Are Protecting IMMIGRANT-OWNED BUSINESSES In Minneapolis, MN. If That Don’t Beat ALL!!!”