Water woes, water woes and more water woes! They just never seem to let up, at least not in majority Black cities in this shithole. First Flint, Michigan, then Jackson, Mississippi and now Baltimore, Maryland.

Baltimore Is Now Dealing With Its Own Water Crisis Because of E. Coli Contamination

Jackson, Mississippi is still dealing with the ramifications of a long-lingering breakdown in water treatment infrastructure. Yesterday, the city restored water pressure to normal levels, but a boil-water advisory is still in effect. Now, Baltimore, Maryland, a city with a 62 percent Black population, is trying to fight through their own water troubles. As ABC News notes, E. coli samples were found in some areas of West Baltimore, and a boil advisory was sent to more than 1,500 people.

There are some questions regarding when the Mayor found out about the contamination. As The Baltimore Banner notes, testing confirmed the contamination on Friday. But Mayor Scott said Monday that the city was first made aware of the problem on Saturday.

Really? The mayor “regrets not telling the public sooner.” Well if that don’t beat all! Nope, let’s just let those poor miserable Black people who look like me continue to drink water loaded down with E.Coli! Don’t for a minute think of their children, the sick and elderly who really don’t need any new issues. Let’s just get around to telling them that their water is fucked up when we get around to it.

That’s how those shameless shits carry it; that’s exactly how they feel for if not, why did they not tell those people as soon as they found out that their water was contaminated with shit? And what is E.Coli contamination? Shit.

Escherichia coli (E. coli) is a bacteria that normally lives in the intestines of both healthy people and animals. In most cases, this bacteria is harmless. It helps digest the food you eat. However, certain strains of E. coli can cause symptoms including diarrhea, stomach pain and cramps and low-grade fever. Some E. coli infections can be dangerous.

How does E. coli make you sick?

The most familiar strains of E. coli that make you sick do so by producing a toxin called Shiga. This toxin damages the lining of your small intestine and causes your diarrhea. These strains of E. coli are also called Shiga toxin-producing E. coli (STEC). The STEC that is most well-known in North America and most often referred to is E. coli O157:H7, or just E. coli O157

There are other types of STEC that are called non-O157 STEC. These strains cause similar illness to the O157 strain but are less likely to lead to serious complications.

Who can get infected with E. coli?

Anyone who comes into contact with a disease-causing strain of E. coli can become infected. People who are at greatest risk are:

So, those folks water is contaminated with shit?!!!! And the mayor did NOT think that it was important to tell those people that their water was full of shit and so stop drinking it??!!! For the love of !!!! I guess the mayor had more important things to worry about like paying other Black people some lawsuit money over bad fucking dirty ass cops!

The long-term cost of the Baltimore Police Department’s notorious and disgraced Gun Trace Task Force to taxpayers just jumped by more than half a million dollars, the result of a newly-approved settlement with one of the gang’s victims. 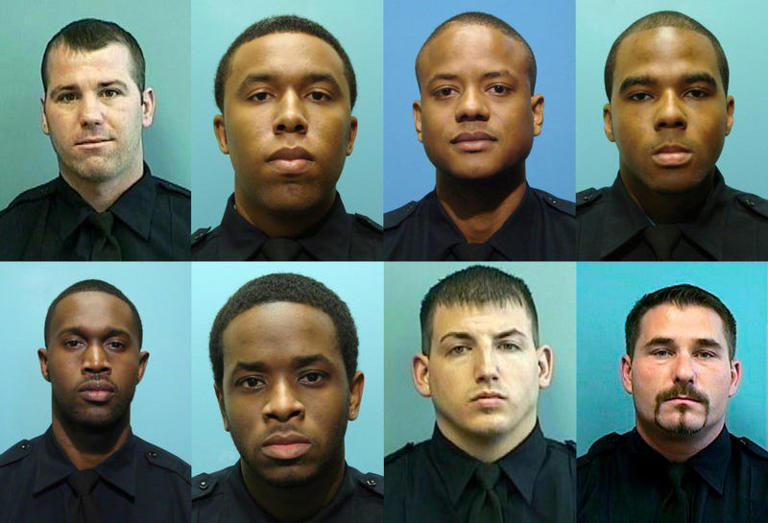 Look at those worthless shits! Don’t you just want to “thank” them for their service in making sure that your tax dollars go for lawsuit payouts because those thugs in blue are just so poor and unappreciated that they have to steal from folks? I guess that drug money looks too good to pass up, not to mention it helps to have a badge because then you can plant fake evidence against a perp, have them locked up for something they didn’t do and those cops pocket whatever they took from the perp or the innocent person they set up. A win/win for the cops.

I’m using the word “gang” here intentionally, to denote that the task force wasn’t just a group of rogue officers, but a corrupt, violent and organized group that terrorized neighborhoods, made money by stealing and selling drugs and banded together under a common uniform and name. In any other setting, law enforcement would’ve labeled them a gang, clique or even a mafia—and since words matter, we’ll call them what they are.

WHAT???!!! The “heroes in blue” were just a stealing from people in the neighborhood, selling drugs, being corrupt, terrorizing folks in their neighborhoods and they’re the “good” guys??!! Get the fuck outta here!

This specific gang that operated within the Baltimore Police Department has now cost the city north of $15 million as officials there continue to dole out payments for their reign of terror. This morning, the Baltimore Sun reported, the city’s powerful Board of Estimates unanimously approved a $575,000 settlement with a man named Darnell Earl, who spent 18 months in jail as the result of an encounter with three members of the gang.

You can read more of the original article to find out what happened to Darnell Earl because what I really want to focus on is the fact that, once again, a city’s water is fucked up and loaded down with shit and the public is not made aware of that fact as soon as city officials were notified and on the other hand, the city, via the taxpayers, are paying out sums of money to settle numerous and ongoing lawsuits over cops gone rogue which is the entire Baltimore Police Department. I know. I have had to deal with them and I would never live in Baltimore, MD ever! I’ve said that before, but I certainly mean that shit now because when you have to deal with the likes of those thugs in blue, you get a clue. I’ve seen some bad cops before, but nothing that I’d ever seen of cops prepared me for the cops thugging out of the Baltimore Police Department, in ALL shades; doesn’t matter, Black, white, yellow, beige, tan, Hindu Indian looking, Pakistani looking or Mexican looking. They are ALL damn thugs, down to the very last one. The cops are SO bad, you’d be hard pressed to find ANYONE in the city of Baltimore, MD that hasn’t had some sort of interaction with those damn thugs. You can’t pass by someone on the streets that’s not been locked up. I cannot count how many people I have met in Lexington Market that didn’t have a story to tell about their experiences of being locked up in Central Booking. Oh, the horror stories. Some even told me that people have been “lost” inside jail. I’m sure their organs aren’t lost. Johns Hopkins knows where they are. Baltimore, MD is the organ trafficking capitol. I heard some shit when I was visiting someone at Johns Hopkins Hospital that I shall never forget. If anyone thinks that Johns Hopkins is some special sort of hospital with a stellar reputation, then be Black and take your ass up in there, you’ll come out feeling a whole lot different; that is, IF you come out.

And so once again, we have yet another majority Black populated city experiencing not only water woes, what with their water full of shit, but an added bonus of dirty, rampant, out-of-control thugged out cops who are more felonious and criminal than any drug dealer on the street. I’d rather run into a drug dealer than run into one of Baltimore’s dirty ass cops. Oh, the final collapse of this shithole cannot happen fast enough!