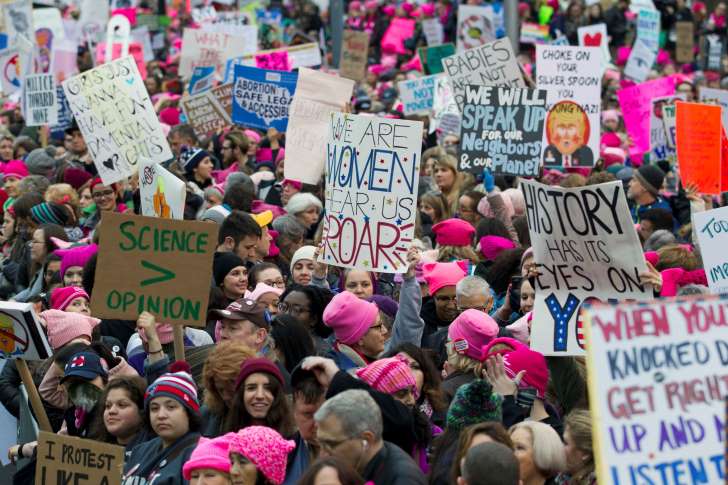 ….you overwhelmingly voted for Donald J. Trump and so what is the deal? Because according to an article in the New York Times, 53% of white female voters voted for Trump and now you’re protesting him? Was yesterday’s march on Washington planned as soon as Hildabeast gave her concession speech which you knew was coming since you headed inside the voting booth and marked an ‘X’ beside Donald Trump and Mike Pence on your ballot and now you are marching and planning future marches to protest what you helped to elect?Why in the world would you get buyers remorse so soon after putting Trump in office? I already knew most of you were crazy, but you’ve certainly proved that beyond a shadow of a doubt.

I saw the pictures of you marching through Washington, D.C. just a proudly showing off your pink hats and various other apparel, apparently to bring attention to your supposed femininity, but it don’t cut no ice with me. Whatever can your agenda be or do you even know? Because I cannot even hazard a guess as to what it is. You clearly made your choice on election day and now you want the world to know that you are upset, to say the least, with your choice? The world should turn its collective back on you instead of standing in solidarity with your foolishness. If you were so afraid that Donald Trump would take your rights away, then the 53% of white female voters who voted for Trump should have voted for someone else because you get what you pay for and you paved the way for Donald Trump on election day by casting your vote for him and so now that you have him, you’re still not satisfied? But then, that’s always been your problem. You’ve too much time on your hands, too much privilege along with too few brain cells functioning and so your thought processes are retarded, obviously, if you can overwhelmingly vote for a man while claiming at the same time that he is a misogynistic asshole; is disrespectful of women, hosts beauty pageants that are demeaning to women, even though you participate in them, and then turn right around and protest what you put into the oval office.

And I sincerely hope that you are not wondering why my Black ass was not standing shoulder to shoulder with the likes of you because it is a known fact that you’ve given not a damn for the plight of the Black woman in Amerikkka from slavery to this very day. As ‘whitewashed’ as history is, it is still well known what you depraved asses did to slave women. It was not their fault for being here and your husbands and sons were lusting after them and it was the slave woman who was tortured by you. And even today, you would only have us stand with you to make your numbers look good when you protest the fact that your own men still hold you in contempt and think of you as nothing more than something to get laid to produce their progeny and then they get up and search for another man’s butthole. But of course, you can’t stand the truth in that you whore yourself out to a man through marriage for those credit cards, McMansions, SUVs and fancy vacations and when you start looking like a dried up prune, he is busy divorcing your ass while you piss and moan over your plight. I’ve seen this too many times to count.

Even though I did see a few Black faces in the crowds, they were few and far between because even we have some retarded women who will follow behind the likes of you because they apparently, don’t know any better or have their own agenda. And of course, we’ve got the bi-racials who will always side with the ‘white is right’ crew; that’s a given and believe me, you are welcome to them.

“Ninety-four percent of black women voted for Hillary Clinton. Sixty-eight percent of Latina women did so. But 53 percent of the white female voters in this country voted for Donald Trump.”

That’s right! You own this one, white women! Ninety-four percent of Black women voted for Hillary because Black women were sincere when they responded to the question when polled about who they would vote for while quite obviously, white women were not since you state one thing and do another. This also goes to show how untrustworthy you are. I damn sure would never turn my back on any of you. I don’t care if you’re in the South, the Midwest or the West; makes no difference because you’re all the same, out for yourselves and damn any one else. That’s how it’s always been with you and it always will be this way.

There were a multitude of responses to the question, “Why are you marching and protesting?” Let’s see what a few responses were.

“At one checkpoint, protesters wore orange jumpsuits with black hoods over their faces to represent prisoners in U.S. detention at Guantanamo Bay. Eleanor Goldfield, who helped organize the DisruptJ20 protest, said protesters wanted to show Trump and his “misguided, misinformed or just plain dangerous” supporters that they won’t be silent.”

Now, isn’t that telling? You were protesting the prisoners in Guantanamo while 2.3 million mostly Black men and women languish in prisons in America and you don’t have a problem with this because you were not protesting that those prisoners should be released, you were worried about those in Guantanamo. Oh, how thoughtful and considerate you are and so selective when doling out your consideration and thoughtfulness because it would seem that some of us are just not worthy of your consideration; namely Black folks.

“Trump’s election was the wake-up call that progressives needed, said Erin Edlow, 28, the membership director of the Virginia Beach Young Democrats. She was in town with her sister to demonstrate her support for the rights of immigrants and of lesbian, gay, bisexual and transgender people.”

Of course Trump’s election was a wake-up call and 53% of white women woke up and headed to the polls to elect Donald Trump as the next president of the United States. They also called on their fellow co-workers, friends, relatives and acquaintances to do likewise and then turned right around and requested their presence at the march on Washington. And Erin Edlow here, stated in no uncertain terms that she was marching for immigrants and for the LGBT crowd but never a mention for those who have been on the receiving end of endless racism, bigotry, prejudice, Jim Crow; the whole nine yards. Why am I not surprised? Hell no! I would never stand with any of you! Not for a nanosecond!

“Although the marchers were mostly female and white, men and people of color also joined the throngs.”
See what I mean? We’ve got a few people of color who were dropped on their head, but by and large, white females along with their male counterparts elected Donald J. Trump. Now why oh why are you so upset over your own choice? And I have stated this before and it would seem that I must state it again. Why be afraid of Trump? He is just like you! Wouldn’t you think that Black people should be the ones marching through the streets, en masse? But you don’t see this and you know why? It is because we are used to Trump since we have to deal with YOU every day and not just for four years or even eight years, but every single damn day and you are worse than Trump! Now, you deal with you! And so get somewhere and sit the hell down because you’re only looking foolish parading around as if you didn’t vote into power the very thing you’re pretending to protest against. Give it a rest! Those of us who have not been dropped on our head, know the deal! When you look in your mirror, Trump is staring right back at you!

There once was a thug named ‘Hillary’,
who laughed and cackled all day.
This witch was immune to prosecution,
and she always got her own way.

Then in struts Weiner in his undies,
to an under age girl, he was sexting,
a picture of his crotch on the bulge
and now, a presidential race, it’s affecting.

The witch named Hillary is livid.
She thought she had it in the bag.
but a man by the name of Andy Weiner
just sank the election for that hag.

Donald Trump is just a’smiling and a’grinning.
He foretold of this many years ago,
that a Weiner would take ole Hillary down
and deliver the final, glancing blow!

When the dust has finally cleared away
and the loser has conceded to the Weiner,
will we each accept what just went down
and go home and ‘eat crow’ for our dinner?

Well? Will we? LMAO! Even though, we should not be amused at this farce of an election, what can we do, eh? I for one, am not going to sweat it. And I do believe it is quite obvious that I don’t want that lying, blood thirsty warmonger, Hillary Clinton to win! Heaven and hell forbid! Damn! I’m glad I can’t vote this year because if I could, I would have held my nose and voted for Trump because I despise and detest that war whore far more than I dislike Trump.