Check the photos, whites, and see if any of YOUR broke senior relatives were left stranded in a California housing complex that housed seniors/disabled people who were left to hang out to dry since the power company(Pacific Gas and Electric), shut off the power in what they say are their attempts to stop the wildfires in California that are even now, still raging.

Does this person look familiar to any of you whites out there? Isn’t she someone’s grandmother? Mother? Daughter? Sister? Niece? Great grandmother? You don’t care about her? Obviously not?

The woman in the above photo tripped over another resident in the hallway and to this day, she still doesn’t know who she tripped over and subsequently hurt her knee. And Black folks are sitting somewhere thinking that whites will ever get up off fucking our Black asses up when they don’t even give a shit for their own elderly relatives.

What about this next woman? Any of you whites out there recognize her? 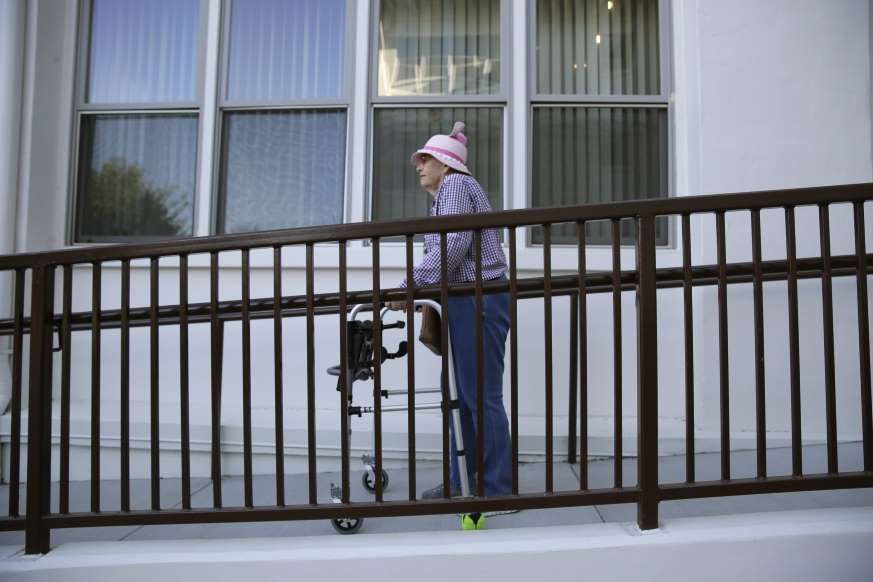 And what about ANY of these? Do you recognize these folks as your family members? Oh, that’s right! They’re too POOR to be bothered with!

Disabled California seniors in complex left behind in outage

NOVATO, Calif. (AP) — One woman in her 80s tripped over another resident who had fallen on the landing in a steep stairwell. Others got disoriented, even in their own apartments, and cried out for help.

At least 20 seniors with wheelchairs and walkers were essentially trapped, in the dark, in a low-income apartment complex in Northern California during a two-day power shut-off aimed at warding off wildfires.

Residents of the Villas at Hamilton in Novato, north of San Francisco, say they were without guidance from their property management company or the utility behind the blackout as they faced pitch-black stairwells and hallways and elevators that shut down.

Where were the families of these people who were trapped in this building when the power was shut off? You can’t get more vulnerable than 80 and in a wheelchair or pushing a walker while living in a senior/disabled low-income apartment complex. Oh I bet I know what the families of these white seniors were doing while their elderly relatives were falling all over the place in confusion in a dark low-income apartment complex, they were busy rescuing FIDO because FIDO and FLUFFY mean more to them than their own damn grandma or great grandma, sister, niece, mother; all of the aforementioned.

This shows you up for the shameless shits you really are, WHITES. You don’t even give a damn about your own elderly, feeble relatives, but you make damn sure that your dogs and cats are out of harm’s way along with your useless, worthless ass.

Not one Black person lives in that building; that is quite obvious and so this shit is not on us, this shit is on you, WHITES. You look worse and worse as each catastrophe comes down the goddamn pike and the shit that is going to go down is only going to make you look worse, but you don’t even care about that because if you did, your grandma would not be left to fend for herself during rolling blackouts especially seeing as how if you were trying to contact your elderly relative at this complex and you got no answer, then you would have known that the power was shutoff. So don’t even come up with the excuse that you had no fucking idea that grandma Becky was sitting somewhere in the damn dark, scared and some more shit. Don’t even bother trying to explain away why Aunt Sarah was tripping over some other poor elderly lady and busting her arthritic knee up while trying to make it down the hallway to find some answers as to when the power would come back on.

And people have the nerve to actually think that we have something to work with these days in that people just need a bit of nudging and that will wake them the fuck up when they don’t even care about their elderly, vulnerable family members who are left in a low-income housing complex with no electricity to fend for themselves and everyone in there is either in a wheelchair or pushing a walker around. The apartment complex management didn’t give a damn about them because they knew of the blackout and did not inform the residents that the lights would be shut off and that the elevator would stop working. How the hell were those in wheelchairs supposed to get out of that building if it too, caught on fire?

Those of you who thought we had something to “work with,” are you still of the opinion that we do after having looked at the picture  and read the content of this post? You seriously think that these worthless ass shits over here in Amerikkka, who couldn’t give two flying turds about their own family members are going to give a shit about someone with a deeper skin tone than their own? These worthless WHITE shits leave their own elderly, feeble and wheelchair bound relatives to fend for themselves during rolling blackouts and wildfires and so what does that say for WHITES? Not a goddamn thing good, that’s for damn sure!

You see, if you don’t have a dime to leave WHITES, then your ass is grass! If grandma Jane was in an upscale assisted living facility, the WHITES would have been all up in there making sure that grandma Jane saw them pretending to give a shit about her just so she didn’t change her will and leave them the fuck out of it, but since it is quite obvious that these elderly people had no money to bequeath their worthless white-assed relatives, they could just fucking die already. WHITES are only going to do something for someone if there is a potential benefit for them and poor assed elderly relatives can’t do shit for them since they’ve got not a pot to piss in nor a window  to throw it out. They’re just sitting somewhere sucking oxygen with nothing to show for it. Yeah! That’s how WHITES roll and they ALL fucking know this shit! And we wonder why the planet is in the condition it is in, look at what WHITES do and how they treat their own goddamn relatives and there’s your clue!

And newsflash, WHITES! Your shit is going to continue to burn, burn and burn because isn’t that what the fuck you did to the Black Wall Street and to the Black town, Rosewood and to MOVE in Philadelphia and don’t even get me started on the “Arkansas sharecropper massacre.” Oh, you’ve got much to atone for and you ain’t even begun to atone. Word is that California is soon going to be ‘unlivable.’ Like that’s news. This entire goddamn shithole is going to be ‘unlivable’ despite how many luxury buildings you throw up. As you can see, the fires are getting ever more closer to more densely populated areas like Los Angeles. I can’t wait to hear that downtown Los Angeles is up in flames. Hallelujah! That’d be a sight to see! All of those high rise, luxury condos and office buildings in smoldering ruins. Too goddamn bad the goats they brought in to chew the weeds near Ronald ‘turning on a spit in hell’ Raygun’s library did such an excellent job that it saved that worthless, racist piece of garbage’s library. No matter, there will be another wildfire season. WHITES bringing us ‘climate change’ has seen to that!