Apparently, this is a tradition and is not deemed ‘inappropriate’ by those who participate or by the majority who uphold this caricature depicting whites in Black face with afro wigs and clowning around, playing the fool as they celebrate SinterKlass/Zwarte Piet. 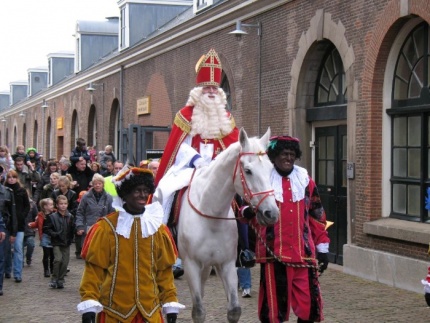 SinterKlass surrounded by his Black clown subjects as he rides into town on his pure white horse with his so-called white skin and in all of his pure ass purity. For those whose skin is actually Black, think nothing of this, just get into the spirit of things and ignore the painful images. We are finally recognizing you, be grateful and thankful because for the most part, you are all but ignored except when we call you “allokhthon”, and means “found in a place other than where they were formed”. But no non-Dutch white person living in the Netherlands is referred to as allochtoon, only non-white people, Dutch and otherwise.”

Yes, SinterKlass or Santa Claus is coming to town. He is the jolly white man bearing gifts to all children, Zwarte Piet in the Netherlands and Black children in America and all around the world. He is the benevolent saint who loves all children, even the ones who are the brunt of jokes, it is all in fun. And to think that Black people embrace this shit that white people have shoved down our throats for centuries. Just as we have taken to believing in their white, blond, blue-eyed ‘god’ which was never a belief of those who were in Africa. Not one Black person in America would be worshipping some false fake ass idol depicted as a white man hanging on a cross if not for the fact that the so-called ‘Christian heathens’ dragged their ancestors across oceans to become slaves. Yes, let us celebrate the coming of the oh so benevolent jolly white man bearing his goddamn gifts that Black people have to work so much harder for to provide for their children then whites do and then turn around and have their children give praise to the white man for their hard work and struggles. No fucking thank you!!! Let us sing the Christmas songs, “Oh Come All Ye Faithful!” “Silent Night!” “Oh Little Town of Bethlehem!” Again! No fucking thank you! Black folks, you better wake the fuck up and realize just what the hell you’re doing. You are doing exactly what the white man wants you to do, give him ALL the goddamn glory that you worked too damn hard for and earned through blood, sweat and tears. Not only your forefathers who slaved to build this godforsaken ‘godless’ country, but those who followed are still being worked to death or starved to death while these ‘godless’ heathens profess to spirituality and to love and kindness. Piss on that!!

And now, one good turn deserves another. Who will find this to be funny?

They can exit stage left and right, these clowns must be replaced.

The world stares in shock while America is disgraced.

Our house is not in order and the senate is a mess.

Obama’s in the garden where he’s lying to the press.

Exorcise these demons; someone please go get a priest!

Was it only last month, they were going to strike the East?

Congress is insane or they need some holy water.

Round them up and lock them up, don’t let them cross the border.

These lunatics are dangerous and hell would hesitate

in claiming them for sure since the devil closed the gate.

The fools are on this ship, bravely holding up a sign,

Saying, “open up the zoo or we will start to whine!”

The seniors and the sick were thrown beneath the bus.

And the parks are back in business since the fools put up a fuss.

Either this is an asylum or Titanic never sank.

We just might be both and you can take that to the bank.

“It’s hard not to believe lunatics have taken charge of the asylum in Washington,” the newspaper The Australian.”

America is diminished by the standoff,” the editorial continued. “Government shutdowns, debt defaults and the shenanigans witnessed in Washington have no place in the world’s superpower.”

China, which is America’s largest creditor with $1.28 trillion in U.S. treasuries, went as far as calling for a new world order — a “de-Americanized” model.

“World leaders are saying, ‘Get on with it and get this resolved. It’s not just about you,'”

“This isn’t the time to be tap dancing to the mid-term elections in the U.S. This affects everyone.”

Countries all over the world are exclaiming over these pompous assholes playing their games while the stupid peons whine about visiting the parks and the zoo. Those in other countries are wondering if it is time to look to other countries for leadership and sanity because we just ain’t it, we’re just shit!