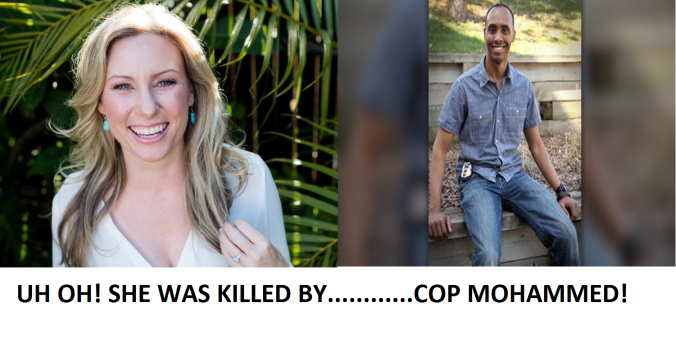 There! I’ve done their job for them. A grand jury has been convened to determine whether or not to hand down an indictment for murder against Minnesota Somali police officer, Mohamed Noor. Even though it was last July that the murder of Ms. Damond took place, I am sure that we all remember what happened, but just in case you cannot remember, maybe this will refresh your memory.

Justine Ruszczyk Damond, a 40-year-old life coach, was killed by Minneapolis Officer Mohamed Noor just minutes after she called police to report a possible sexual assault in the alley behind her home. Noor hasn’t been charged, and Freeman said weeks ago that more investigating was needed in the case. He also told activists in a recorded conversation that he didn’t have enough evidence and investigators “haven’t done their job.”

Now, let me get this straight, there is not enough evidence that Somali Officer Mohamed Noor killed Australian immigrant, Justine Damond, by shooting her in the stomach as she approached the patrol car after she initially called the police to report a possible crime in the alley near her home and she accidentally belched after having eaten her dinner which startled Officer Noor’s partner which they say resulted in Officer Noor fearing for his partner’s safety which then caused him to shoot Ms. Damond in the stomach which led to Ms. Damond’s death? And as I read that back, it doesn’t even make any sense; none whatsoever.

So, if I am a firm believer in ‘Neighborhood Watch’ and I hear a noise near my home sometime during the night, and it sounds like a crime in progress and I go outside to investigate and my neighbor comes up to me because she too is wondering what is going on and she farts and I am startled by the noise and I accidentally shoot her dead, am I guilty of a crime? Uh…that, apparently, would be a resounding, “NO!” according to Hennepin County Attorney Mike Freeman.

It has to be “NO” because according to Hennepin County Attorney Mike Freeman, “he didn’t have enough evidence” to charge Noor with a crime because “investigators haven’t done their job.” AND…”the officers didn’t turn on their body cameras until after the shooting, and there was no squad-car camera video of the incident,” which begs the question, “If the police have nothing to hide, why is it that more often than not, their body cameras are not turned on, and in many instances, even their squad-car camera video is turned off?” Taxpayers are paying out the wazoo for those body cameras and so why then are police not using them? What are they for? Decoration?

Ms. Damond got just what Philando Castile got, he got shot dead too, by a cop who was also acquitted by a jury and for the same reason, Officer Jeronimo Yanez stated that he “feared for his life” even though he had requested that Philando Castile produce his identification and upon doing so, Philando Castile was shot for it. Castile was initially pulled over because he had a ‘wide nose’ and apparently, someone who had committed a crime also had a ‘wide nose’. So, a man is dead because he had a wide nose???!! I cannot tell you how many people I have seen who have wide noses and they would all have been presumed guilty because of that? Seriously??? The man was a model citizen just as this Ms. Damond was said to be and yet, both are dead and the murderer of Philando Castile has already been acquitted and the murderer of Ms. Damond will be not be indicted or found guilty for killing her. Too bad Ms. Damond did not insist that her and her fiancee return to Australia, she would be alive today. Unfortunately, Philando Castile had no say in being here seeing as how his ancestors were dragged here and that’s his reason for residing in AmeriKKKa, but apparently, Justine Damond just assumed from reading all the reports of cops shooting Black people that it just could not happen to her. Well, it did! And the cop that shot her has not even been made to open his mouth about what he did to Ms. Damond since he shot her dead last July. Let me shoot someone dead and my Black ass would already be cooling my heels in prison and no States Attorney would be mouthing off that there was just no evidence to even compel me to talk, much less indict and prosecute me for murdering someone.

How is it right and just that there are two separate laws; one for the police who kill people and one for everyday citizens who kill people? Murder is murder and if a cop murders someone while in uniform or out of uniform, if the killing was unjustified, that cop should be charged with murder and sentenced, but nothing doing. Why are we allowing this to continue? By simply marching down the damn street, we do nothing about any of this. The entire ‘American justice system’ is a sham and that should be well understood by one and all by now. We can comply with the instructions from the police and still end up dead by police. We can be the ones who call for assistance because we think a crime is being committed against a fellow human being and end up getting shot dead ourselves and the cops aren’t responsible? Seriously? Yes, the upper middle class white folks in South Minneapolis were in an uproar for a bit and succeeded in forcing the police chief to resign, but has that actually solved the real problem which is that the entire system is dirty and full of nothing but corruption from one end of this country to the other? No, it hasn’t. White people were absolutely shocked, appalled and horrified when Ms. Damond was shot dead in her yard, because that just should not happen to whites; that which has been happening to Black people on a daily basis since forever. And even though the police killed a white woman who had no criminal record, there have been no sweeping changes and there will be none because we have just come to accept the fact that we live in a police state and so we deal with it and hope that we are not next.

Well, just you ask Ms. Justine Damond did she think in a million years that she would make headline news for being the victim of ‘death by cop’ and I am sure she would have laughed in your face because everyone knows, only Black people can count on making those headlines. And though she was an Australian citizen, even the Aussies have shut the fuck up since this went down. This murder occurred in July of last year and we are nearing the end of January and I’d not seen one article about this until yesterday, when it was announced that a ‘grand jury had finally been convened and for what? Ask Tamir Rice!

Finally, find out how many cops have served in the U.S. military, the numbers will astound you and we should also be aware that the U.S. military turns ‘humans’ into killing machines and so then, how could they let those killing machines loose on city streets in America when those killing machines have been programmed to kill? I guess same as how they’ve militarized the police force all across America with military equipment from war zones. I’m not saying that Noor or Yanez served in the military, but a great number of murderous cops have indeed, served in the military. What’s been deployed to war zones is the very last thing we need patrolling our streets!

#HERjournal
Musing of my Mind