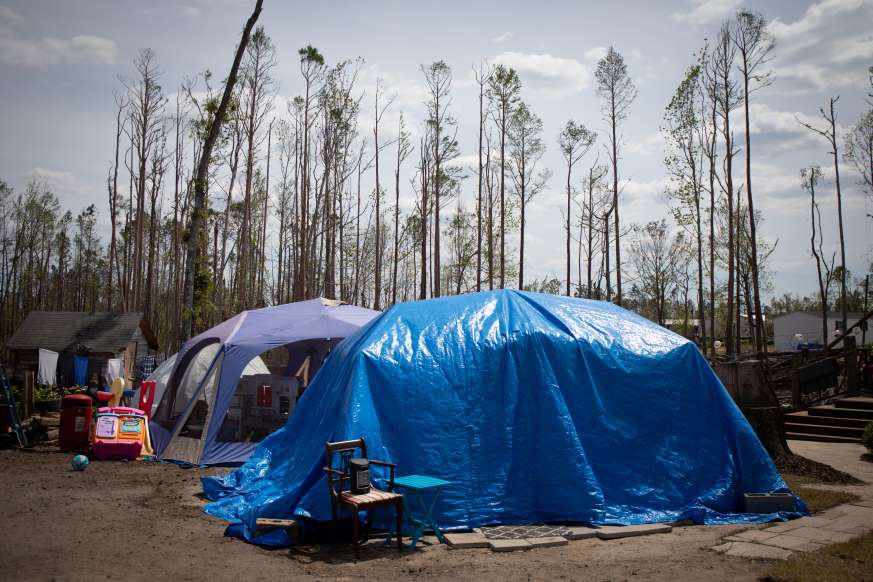 Those who were impacted by Hurricane Michael in Florida’s Panhandle are sitting somewhere in tents or are in motels wondering when is life going to “return to normal.” It’s not, but others will soon find out just how frustrating it is to live without the ‘creature comforts’ they had been taking for granted. And in case you have forgotten, Hurricane Michael made landfall in North Carolina on October 20, 2018 and whipped the states of South Carolina, Virginia, Georgia, and Florida on the way into land.

Many residents are living in damaged homes or trailers unfit for human habitation. Some live in tents.

FEMA has been paying for 283 families to live in temporary housing for six months, a period that expires Tuesday . The county and state applied for a 90-day extension; this week, FEMA granted 60 days, and only 17 families qualify.

“What this means is, come Tuesday, about 800 individuals will lose their housing with nowhere to go,” said Griffitts.

Mother Nature, ‘The Equal Opportunity Gentrification Administrator’! Thank you Mother Nature! And for those of you who think that you are immune to what’s going down, you are not. Get over yourselves because typhus and hookworm are coming to a tent near you! Yes indeed, you are going to join those poor homeless Black people who are on Skid Row in trying to get rid of worms dripping out their ass! White parasites like camping, so you should feel right at home in your damn tents! What’s the problem? You only want to go camping when it’s ‘Vacation Time’? Well, consider this to be an extended vacation. You may as well make the most of it since you’re in it for the long haul. Pampered white parasites just cannot stand hard times. That’s for those who don’t look like them. That’s for humans to deal with. Not anymore, it isn’t. Now parasites are getting a taste of what they’ve never had a problem dishing out!

“The next big challenge is wildfire season, which runs until July. The storm destroyed 72 million tons of timber, according to Jim Karels, director of the Florida Forest Service. No more than 15 percent has been hauled to sawmills and paper mills. The rest is still on the ground — a disaster waiting to happen.”

More and worse shit to come! So batten down the hatches or should that be, run for the hills? HA! I’m loving it! And the article goes on to state that even the fucked up military is counting on those asswipes in Congress to pass a disaster-funding bill to help rebuild Tyndall Air Force Base since it “took a direct hit from the eye of the hurricane.” HA! I fucking wonder why! Like hell I do!

“Many of the lingering effects of the hurricane are intangible — stress, anxiety, depression. Normal rainstorms trigger outsize panic. People are visibly fatigued, wrung out.”

In Panama City, Sabrina Fleming is back in business at Peggy Sue’s Barber Shop. “I’m 42, but I feel 82,” she said. “Life is just harder now. Everything takes time. It’s so draining and I want to just run away.”

One young mother of three, Stephanie Michelle Powiliatis of Panama City, posted a plea on a local Facebook group: “There are so many levels to this destruction that no one could have predicted, and I feel completely out of control lately. I’m constantly scared, more anxious than I was before Oct. 10th, depressed, and worried. Please tell me I’m not alone here.”

More than 200 neighbors replied. They assured her: You’re not alone.

No, you are not alone…never think that. Other pale-assed parasites are about to join you!

Nearly 40 million at risk of severe weather over weekend

A new storm is beginning to organize along the Texas-New Mexico border, and it’s expected to deliver a first round of severe weather today from Texas to Mississippi.

Gusts of almost 60 mph and golf ball-sized hail already have been reported in west Texas this morning.

The system will head east across the southern Plains from San Antonio toward Dallas.

So, as you can see, folks in Florida, there will be millions more soon to join you. Also, let us not forget that Nebraska, Wisconsin, Iowa, South Dakota, Minnesota, Colorado and basically the entire Midwest was recently devastated. Those folks are over there wailing and screeching and begging Mike Pence to do something about the damage the bomb cyclone wrought on their land. Land which didn’t really belong to them because it was first stolen, but Nature has reclaimed it. Again, thank you Mother Nature. Ever the equalizer, you are, to be sure! And those of us who have been the victims of white land grabbers appreciate you leveling their fields, overflowing their levees and fucking up their bottom line. I’ve seen pictures of submerged farmland, dams overflowing, entire towns underwater as well as massive piles of grain, destroyed and that meant money, money money. But not anymore. Now, they are over there asking and begging for relief from their white gods, Mike Pence and Donald Trump. Here’s an idea! Take your ass to another Trump rally and beg him for some help! But the problem is see, he can’t help you and even if he could, he’s busy trying to keep those south of the border from coming to this fucked up shithole to sit somewhere alongside you and watch you bemoan the loss of your shit in this shithole.

Those south of the border must have it mighty bad if they want to come here and sit up and watch white parasites wail, screech and moan over the loss of their precious possessions. I’m fucking buying earplugs ’cause I’m tired of listening to your whining about how you’ve lost every goddamn thing! Good! That builds character. Oh my bad! You must first have some character to build and parasitic as you whites are, you don’t have any! Well sit your pale asses down and continue to cry, moan and wring your hands in your tents and wait for Congress to get around to forgetting about Trump’s tax returns long enough to pass legislation to get you some funding to rebuild! From what? Scratch? Just scratch around and you’ll find something of value in that brown quagmire that’s swallowed your shit whole! Goddamn! This is all just SO wonderful, I can barely contain myself.

You savage white shits are getting just what’s due you! And so dig into that lovely brown muddy sludge because you ain’t done getting what’s coming for your asses! I’ve said this before and I’ll say it again. “You got So goddamn much to answer for, you ain’t even begun yet, but you will!” Mark my fucking words, you worthless asswipes; firenadoes, lavanadoes, tornadoes, bomb cyclones, earthquakes, historic flooding and much more is coming for your ass! And newsfuckingflash! There is nowhere for you to drag your pale parasitic ass! So stay put and wait for it! It won’t be long now! I promise you!

The White Man Is The Worst Landlord

No more thoughts run through my head
of killing fields and of the dead.
I have become immune to the suffering
of all the addicts who aren’t recovering.
I immerse myself in fun and games
as I ignore the world as it goes up in flames.
For why should I put forth an effort
when I’d rather traverse a hot and arid desert
than think of the white man as he withers and dies
from all his atrocities, wars and lies?
No plague could be too severe;
no earthquake would I fear.
For the white man is the worst landlord.
And upon his death, this world could be restored.

Yes indeed, the ‘white man’ otherwise known as a parasite is THE worst landlord! And now, you are going to be repaid for ALL the fucking vile ass shit that you have done ALL across this godforsaken planet! ‘White privilege’ is not going to save you! Your fucked up sense of ‘superiority’ is not going to save you! Your bombs and drones and missiles are not going to save you! The money you spend on military might is wasted because some military installations are underwater and are useless. Those politicians who look just like you are fucking useless because there is not a goddamn thing that they can do to fix your fucked up shit! The world can’t be rid of you fast enough! But know this! Your fucking number is up!