I will always remember you,
on this day over all other days.
A country that had always hated you
took your life and left me, your kids to raise.

Even in war, segregation was maintained.
You were not even equal in a combat zone.
But you gave your life anyway.
And all that’s left of you is a flag and a tombstone.

I knew you when you laughed and loved
but not the you who learned to shoot to kill.
And our children will never understand my pain
or the heartache that is a war widow’s bitter pill.

So many decades have come and gone.
And still, young men are sent to die.
It would seem that no one is paying attention.
They just heed yet another battle cry.

For some, today is all about hotdogs.
And for others, a day off is just as good.
But for me, I will spend this day alone,
huddled in my cloak of widowhood.

Black girl, you have known such brutality
from the slave fields to Jim Crow.
And yet they expect you to celebrate
what for you has been a hard row to hoe.

You are to get out that great American flag
and watch it wave over land you have tilled.
You have watched your mother and your father
work harder because they were unskilled.

Sit outside and watch the fireworks display.
Put a couple of hot dogs on the grill.
Don’t forget to eat some apple pie
and then head for the baseball field.

Forget about all the horrors
that this nation has heaped upon you.
Don’t think of all the innocent people
who were killed by this red, white and blue.

Remember what this nation stands for.
And that brutality is sown in the flag.
They have watered down the truth of its history.
And your ass is too good for that rag!

So, you want to honor the grateful war dead?
But you never put an end to why so many tears are shed.

Stop feeding the warmongers lust for power.
We fight for some shits who sit in an ivory tower.

Why the hell is ‘friendly fire’ such a fucking good thing?
And ‘collateral damage’ has a great sounding ring!

Get that goddamn modified hotdog down.
And wave a ‘made in China’ flag all over town.

What is there really to celebrate?
America’s desperate need to dominate?

What a goddamn way to memorialize the dead,
by ignoring homeless vets who are fucked up in the head.

You celebrate the rich who are swilling champagne,
while the families of the fallen are living with the pain.

Enjoy this holiday and throw some meat on the grill.
While those who made it home, don’t have a decent meal.

You’re so fucking hypocritical when you celebrate this day.
And tomorrow, a homeless vet, won’t have a place to stay!

Yeah! Let’s fucking celebrate! ‘Cause ain’t a goddamn veteran, homeless, hungry, mentally ill and some more shit! So, let’s fucking celebrate how fucking grateful we are to those who’ve died all over some bullshit and for those who make it back home, we are so fucking fine with their status of being fucked up and homeless. Eat a goddamn hot dog for THEM!! Fire up the grill and then pass some more laws tomorrow to make it more and more difficult for them to be homeless.

America is filled with some stupid ass shits! And I ain’t fucking bragging, I’m just fucking sayin’!!! We are celebrating!!!! 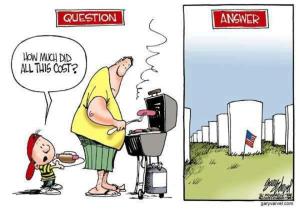 Men and women died for those who hoard the wealth.
And that is why this weekend, we celebrate their death.

Eat your hotdogs, hamburgers, steak and baked beans
And pretend that you don’t know what war really means.

Display the stars and stripes and lay a wreath on a grave.
Our soldiers fought the enemy, oh they were so brave.

They sacrificed their lives for the freedoms we enjoy.
The enemy just won’t die, there’s always someone to destroy.

We celebrate the dead who need not have died.
We gorge ourselves on hate, intolerance and pride.

If the dead could speak to us, we’d not celebrate this day.
They’d question why a death in vain deserves a holiday.

Soldiers, keep fighting the wars started by the rich. Maybe one day, they’ll hand you more than $20,000 a year, food stamps and a flag to drape over your coffin. Yes, keep fighting and keep hoping for more and meanwhile, we’ll celebrate your sacrifice on Memorial Day. We’ll eat a hotdog in anticipation of ‘in loving memory’ of you because it’s only a matter of time before you’re in a flag draped box.